Home / The value of the Aztec tattoos

This material will explain the value of the Aztec tattoo, lead to examples of interesting ready tattoos, explain their meaning and history. For those who work out the variant of the unique drawing and forms an idea, we suggest to visit our catalogue and to familiarize with a lot of drawings: 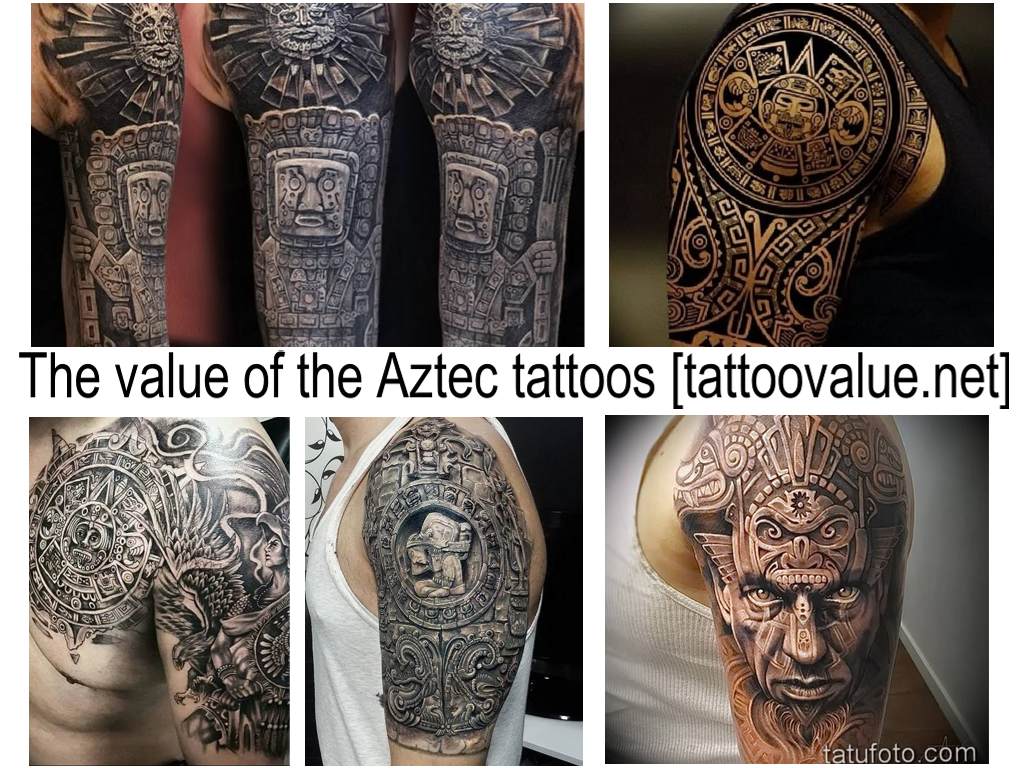 Interesting about the history, meaning and meaning of the Aztec tattoo

Tattoos with meaning increasingly gaining popularity. So, one of the types of semantic tattoos-is Aztec motives. These are patterns of quite large sizes with many details. And each of the parts carries its own semantic load.

The meaning of tattoos

Aztec tattoos, which came into the modern world from ancient tribes, most often had religious and ritual meaning. Most often they portrayed dominant gods-the sun god, the god of War, the winged God-serpents and others. Depending on the affiliation of the tribe, tattoos differed – the spiritual estate wore tattoos depicting the sun god and scenes of ritual sacrifices. The Warrior estate is the face of the god of war with the tongue language in order to scare his enemies.

Tattoo Aztec cultures were applied to certain parts of the body: chest, shoulders, arms and tummy. It is through these areas, according to ancient giving, the divine energy flows.

In the modern culture of tattoos are quite popular and Aztec symbols-letters, numbers, ornaments. Often Aztec tattoos are confused with a tattoo in the Mayan style. But the Aztecs more often portrayed the gods on their bodies. And the Maya were more militant people, so the god of war, the god of death and the scenes of violence met more often.

The Aztec style also includes images of crystal skulls, the stories of which are quite popular. After the «Untwisted end of the world» in 2012, the Mayan calendar and their motifs also gained popularity.

photo examples of the Aztec tattoo:

But scary gods and skulls are far from the limit of dreams of sophisticated clients. For example, in a tattoo parlor or on the Internet you can pick up a tattoo sketch with the image of the Mayan pyramids, the symbols of the sun, graphic images of ancient letters and figures, ornaments with adding Aztec symbols.

Also the Aztecs revered not only the sun God, but also as many ancient cultures, worshipped all celestial luminaries (moon and stars) and natural phenomena (wind, rain, thunder and others) and each of these phenomena had its own symbol, which necessarily found its place on the bodies of ancient warriors.

Color tattoos, of course, favorably differ from monophonic, but not in the case of tattoos in the style of Aztec culture. In these tattoos the greater slope goes on shadows, painting the background in a lighter tone, sometimes such drawings even acquire the effect of 3D, which is poorly combined with the riot color. The exception may be crystal skulls of pale blue color or tattoos with bloody skulls and scenes of sacrifice with blood streams of bright scarlet color, but this kind of drawings on the lover.

When choosing a tattoo in Aztec style should be ready to the fact that these tattoos are quite large. And when you choose a small picture is better limited to a letter or a digit, because what is essential with the semantic load on a small area of the skin can’t be placed.