Home / The value of the stork tattoo

It was once believed that tattoos are either sailors or criminals, often bikers. To date, tattoos have become a popular body decoration for very, very many. Now the tattoos depict not only stars, shoulder straps and anchors, but also emblems, hieroglyphs, symbols, animals and birds. Many would like to use tattoos to differ from others, as if to isolate themselves. Previously, tattoos were mostly in men. Now and many girls want to have a tattoo. Beautiful, symbolic, stylish. Let’s try to deal with the stork’s tattoo and the value of the stork tattoo today and in the past. A little immersed in history and symbolism, with the aim of full study of the tattoo. Naturally, we will offer you to familiarize with sketches and photos of the ready-made stork tattoo. 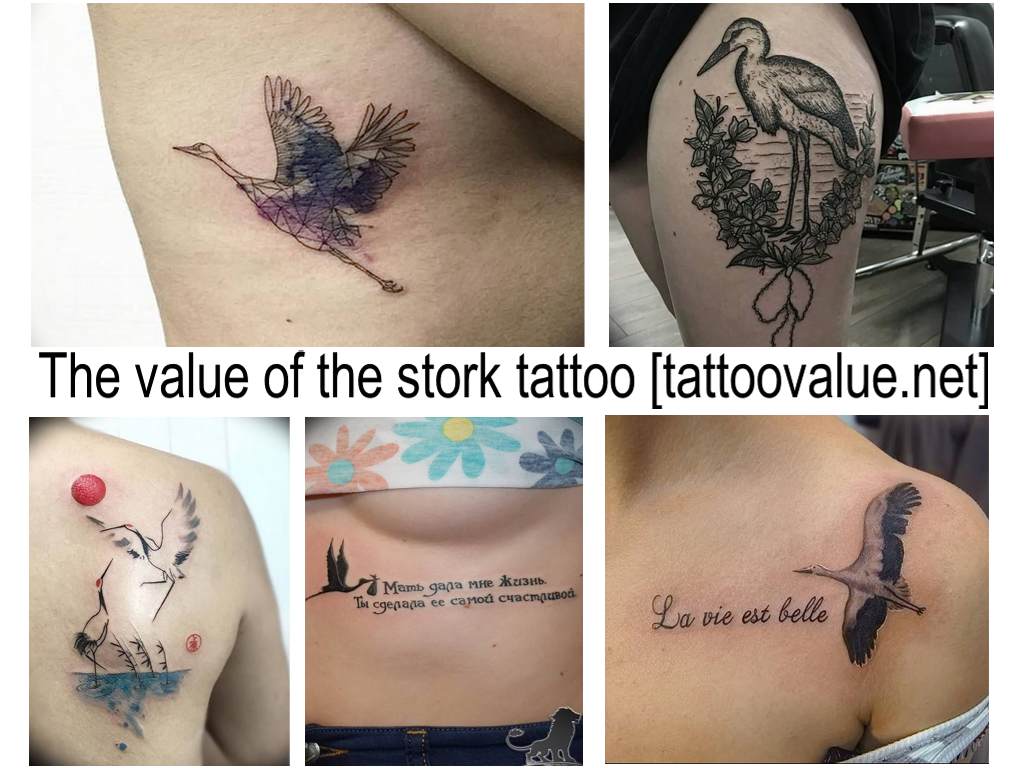 What is the value of a stork tattoo

And, of course, it is very interesting to know what a tattoo means. Here, for example, a stork. What associations do you call this big conveying bird? Wow! Storks flew! Spring!

People consider the stork as the Guardian angel of the hearth. The stork is not afraid of people, Viet nests on the tops of trees near the human habitation, returns from year to year to the old place. Therefore, it is a symbol of permanence and well-being. The image of the stork from ancient times is considered talisman, a positive symbol. Therefore, the stork is tattooed to have a indelible amulet and protect himself from troubles and misfortunes.

One ancient legend says that one day God gave Eva’s son a sack and ordered him to drown him in the sea. However, he was curious and opened the sack. From the bag crept snakes, worms and toads. They quickly spread over the earth and flooded it. Then God, in punishment, turned him into a stork and commanded him to purify the Earth until his death.

The importance of tattoo with the stork in different cultures

The stork eats snakes, frogs, mice, destroying evil and, therefore, is considered to be a wrestler with a scourge, and the image of a stork-a symbol of purity. Storks often twist nests on the roofs of houses. It is very symbolic: the stork on the roof of the house symbolizes protection and patronage. This House will be rich and prosperous. The Guardian of the hearth is usually a woman. In her power to create in the house warmth and coziness, and of course, she really needs an angel guardian of the house, which will bring good and good luck in the house. A stork, a mysterious and beautiful bird.

In ancient Greek and Roman mythology, the stork is considered the sacred bird of the goddess Hera (Juno), the patroness of motherhood. That is why many legends say that the stork brings the baby into the house. «Mom, mom, how did I come to light? The stork has brought you, son», – we often hear. And I really want to believe that it is true that this is really the true value of a stork tattoo.

Examples of tattoo drawings with a stork:

Taoists perceived the ability of the stork for a long time to stand motionless on one foot by a pious symbol of contemplation and meditation. Therefore, the Taoists stork is a symbol of immortality, and in China it is a symbol of a prosperous life and a happy old age.

In ancient Egypt, Greece and Rome, the stork is a symbol of devotion to daughters and sons. Ancient legends say that children-storks help their elderly parents. They feed them together with their chicks, clean their feathers and take care. In ancient Rome, the «Stork Law» called the duty to care for elderly parents.

The stork is a solar symbol, but it is also connected with the element of water. It is believed that he finds babies in the waters of creation when he catches fish.

So what is this stork tattoo? Very feminine, beautiful tattoo. It symbolizes life, birth, motherhood. This bird brings happiness. Symbol of spring, renewal, time of change. It is a security amulet, bringing health, longevity, wealth. A symbol of well-being and happiness.