Home / The value of the Angel and Demon tattoo

In the material we will talk about the importance of Angel and Demon tattoo, try to understand the meaning and history of this deep and popular figure in the art of tattoos. Those, who before applying to the tattoo salon wants to work out the idea of his future, unique tattoo in detail, we offer after reading the article, pay attention to the following sections of our catalog: 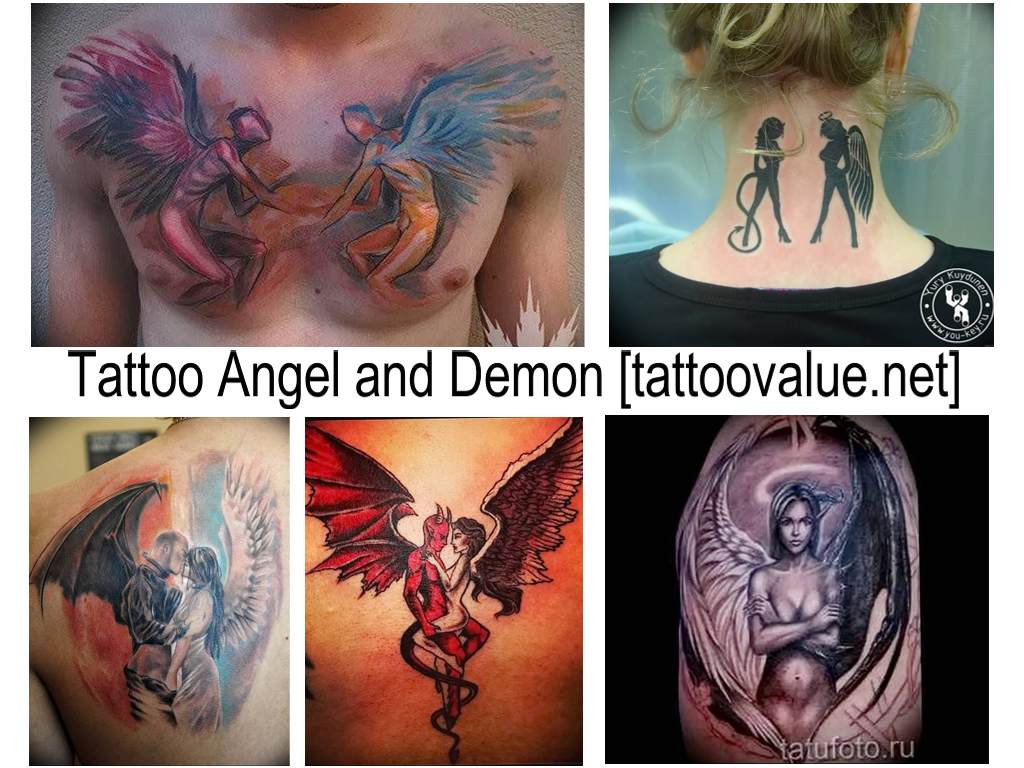 Meaning, history and meaning of the Angel and Demon tattoo

One of the most popular traditions in the world of tattoos is the combination of opposites. Whether it is symbolic in the form of images: love and hatred, holiness and error; Contrast of colors and shades or location on the body. The most ambitious example is the image of an Angel and a Demon that combines all three symbolical associations.

Angels, translated from Latin «messengers», appearing in the image of beings with human bodies and white wings behind the back. Most often, their mission is to unite spiritual and physical strength, but in different cultures it appears differently.

It is believed that the Angelic creatures:

The value of the tattoo on the body can also evolve depending on the place and method of the creature image:

Demonic tattoos are more common and in demand and are often divided into two categories.

The choice of the image in the form of an Angel speaks about aspiration of the girl to moral purity and spirituality. Express her belief in higher powers and a request for protection. Being clean and sincere, the owner of such a tattoo is always fashionable to fall. Usually, girls choose to tattoo their back, shoulders and legs.

Photo examples of drawings of an angel tattoo and a demon:

The choice of the image of Demonic countenance speaks of temptation and fall of its owner. Differing Angelic appearance and modest character, recurring such tattoos are very passionate and spiteful inside and are able to express their true essence only by means of images on the body.

Persistent and modest representatives of the strong sex also often choose a tattoo with the image of an Angel, expressing humility to life difficulties. They believe that the keeper protects their body and soul.

But more common is the picture of the battle of the Angel with the Demon, speaking of the struggle of good and evil in man and indecision to take any side. However, the majority of male representatives, portraying scenes of such battles, do it simply for the sake of a spectacular picture, without investing in it a special semantic load.

Very often tattooed in the image of an Angel are criminals, penitents in their sinful life and dreaming to redeem the guilt, changing the fate for the better, thus asking for Angelic protection-the peculiar meaning of the Angel and Demon tattoo.

But the Demons symbolize hatred of the authorities and the entire prison hierarchy, showing their negative attitude to the system.

If practically any image of an image of an Angel is protection from an evil eye, corruption and a sign of positive thinking. The Demon tattoo carries only negative information. It is made by people, covered by passions and temptations, tearing them from within, for constant reminding.