Home / The value of the Pansies tattoo

This material reveals the value of the Pansies tattoo. You will also learn about the legends associated with this delicate flower. After reading the article, we suggest to look: 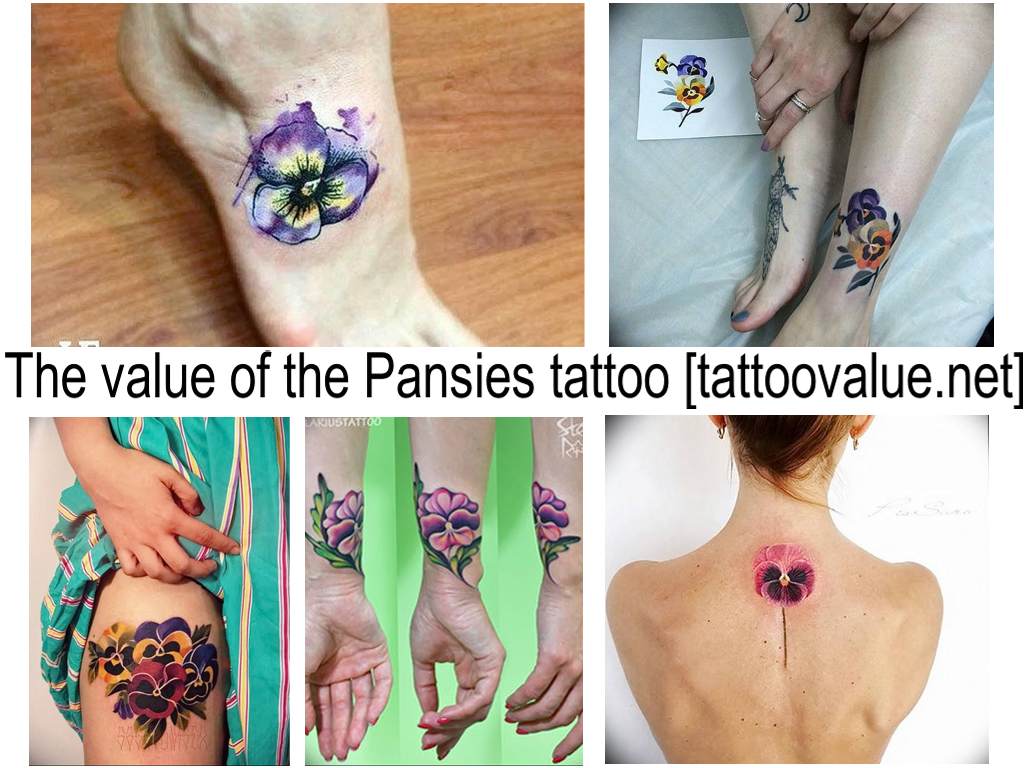 Meaning, history and the value of the Pansies tattoo

Even in distant times it was customary to apply certain symbols to different parts of the body, thus showing their belonging to a particular clan or tribe. Various drawings indicated who the warrior is and who the shaman is. Everything depended on the character that the body was decorated with.

In today’s world, anyone can tattoo, not always giving it any sense, but just for the sake of decoration. The person aspires to beauty, and skillfully executed drawing certainly will attract attention of others.

The symbolism of the Pansies flower

The flower Pansies has another name-violet pansy. In the people it is called: a violet Garden, the stepmother. He has five petals, and in shape he reminds the heart. Perhaps for such a «cordial» similarity these flowers and evoke love memories and heart yearning. If you wear Pansies with you, it will attract love, and tattoo is a very good option for this purpose. On the other hand, the aura of violet is cold, the rain is its element, but despite all this, the magic power of the flower is still love.

Many of the flowers of Violets remind a forest elf, scrunching face from deep reflection. For Europeans, the value of the Pansies tattoo of is defined as a symbol of thought, memory and reflection.

A trip to the past

As early as in the XVI century in the Handbook of medicinal herbs the name of the Pansies peephole is indicated as «the herb of the Holy Trinity». Sometimes in the culture of Christianity Violet tricolor associated with the Trinity.

This was severely condemned by the representatives of the Church.  They could not allow the majesty of God to be compared to a «low earthly flower».

Photo examples of a picture of a tattoo of a pansy:

The value of the Pansies tattoo has an interesting story

In ancient times these flowers were a symbol of fidelity and love. According to legend, men, established, as bathing goddess of love, turned into Violet tricolor. Different peoples have their own view of this flower, but they are united in the opinion that it means fidelity and love. The girls of Poland as a gift to his beloved, when they had to leave for a long time. It was believed that a man in distant travels will remain faithful. The French called the Pansies «Flowers for memory». For the Greeks in ancient times this flower symbolized the love triangle. Flowers «Heart Delight», as they are affectionately called in England, is accepted to give to Valentine’s Day. In Romans the image of the goddess Venus is closely connected with this violet.

Drawing Pansies eyes with drops of dew, according to the legend, can cause rain. In Russia, as in England, superstition attributed to this beautiful flower connection with the afterlife, because the weather is subordinate to the dead ancestors.  It was also called «The Flowers of the dead». But, despite all this, violet Pansies afforded skill bewitch. If splash juice on the eyes of the sleeper, waking up, he will love the first person to see. Therefore, the tattoo of a flower with droplets juice can be regarded as a turning tool.

A flower tattoo of Pansies can act as a talisman, because it is well-assisted by the evil eye.

Thus, every value of a Pansies tattoo carries in itself a desire for happy and eternal love.

Watch the video with examples of a flower tattoo pansy in the photo: