Home / The value of the tattoo «Angel of Death»

This material describes the value of the tattoo «Angel of Death», will offer to familiarize popular figures, describe their interpretation and history of appearance in the art of tattoos. More examples you can see in the following sections of the catalogue: 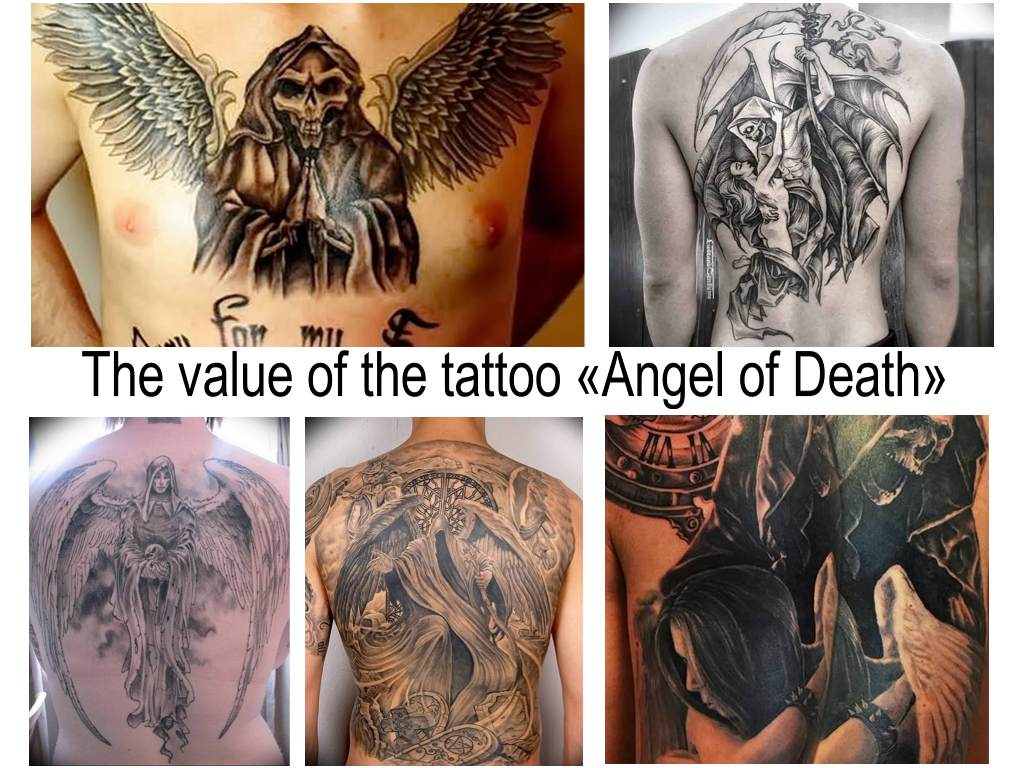 Interesting about the meaning, history and of the tattoo «Angel of Death»

In many people at one kind of Angel of Death There is a feeling of animal fear and hopelessness. But is it really scary image? And does it have at least one positive value?

In the beginning of XIV all Europe suffered from a terrible epidemic – a plague. She destroyed a lot of human lives. These events led to people fearing to go outside in the belief that «death mows all people». For them, the angel who came from heaven with a huge scythe became a symbol of cutting off the soul from the body. German painter and the schedule of Durer first visualized the angel of Death with a scythe in the picture «Knight, Death and the Devil».

Position and type of tattoo

The Angel of Death is accepted to portray in the form of obscure or, on the contrary, a clear silhouette in black clothes. On the head of a frightening angel would throw a hood, in his hands a scythe, and behind the back uncovered in a terrifying coverage black wings. In the light version of the tattoo is portrayed without a face, in its place tan or light zone. But more often the angel of death his A sinister and smirking skull. This tattoo involves a lot of small and important details, so it is often put on the chest or back in order to cover a large area of the body. The color palette of the image stops on black and white, but also the inclusion of various bright shades is not uncommon.

Photo examples of drawing a tattoo with an angel of death:

The Angel of Death tattoo can cause horror and fear. When a person thinks about its meaning, the first thing that comes to mind is the final point of life and existence of all living things on earth. Only people with strong nerves, strong spirit and incredible courage fill this image on the body. They are not afraid to suddenly leave their lives, and also do not pay attention to the opinion of others about their persona and actions. Not everyone is given to live with the symbol of inevitable death. Therefore, if a person mistakenly chooses this tattoo, it is waiting for a band of failures and mental disorders.

The meaning of the Death Angel Tattoo along with the additional images can describe the nature and principles of the person. So, the arrangement with the girl holding a flower means that the person tries to balance good and evil. Playing cards in combination with the dark image of the angel symbolize the attitude to life – a man playfully disposes of his body and constantly jokes with death. In the prison environment, the Angel of Death warns that the prisoner is capable of cold-blooded murder.

One can highlight the main thesis of the meaning of the Angel of Death Tattoo:

The Angel of Death still has a positive meaning. This image on a body can be the main talisman for the person. In risky situations, he will magically protect his owner from death. Therefore, the tattoo is often found on the chest or shoulder of bikers, ready to play daily with death at a huge speed.