This article will give you a chance to learn everything about the significance of tattoo “anarchy”, tell you about the symbols, popular in the tattoo, their history, sense and interpretation, offer patterns for viewing. 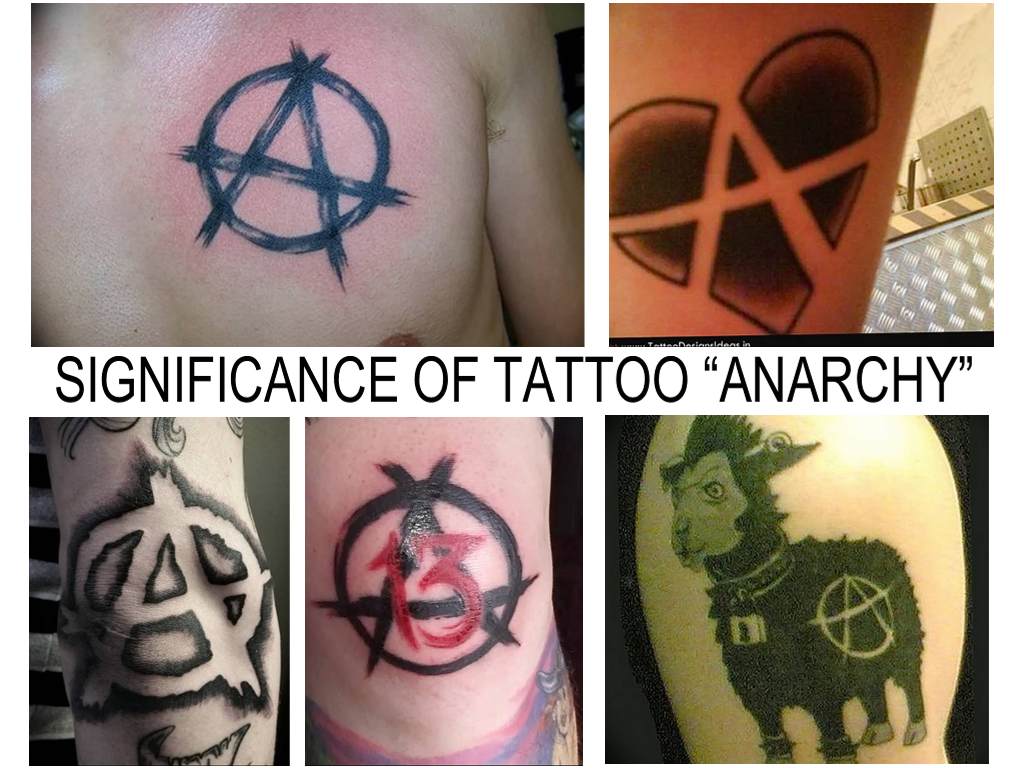 Interpretation, sense of symbols and significance of tattoo “anarchy”

If you muse upon choosing a picture on your body, it’s worth paying a particular attention to the symbol of anarchy that is rather popular. The word “anarchy” can be translated from Greek as “absence of authority”.

People who call themselves anarchists, reject any authority. They are convinced that in the ideal society no one must obey anyone. The government is not necessary, people can perfectly do without it.

Anarchism has a lot of trends, but the left one is the most popular. Its supporters not only want to abolish the state, but also fight against capitalism and private property.

What is the meaning of the tattoo?

Both men and women choose this tattoo which can be designed in various styles:

The symbol of anarchy – the stylized letter “A” within the letter “O” – has a lot of meanings. Usually this tattoo symbolizes a protest against the ruling regime, negation of the existing authority. Though some anarchists are aggressive and inclined to violation, others stick to pacifism and reject any use of force, even with reference to animals.

Photo examples of the tattoo anarchy:

The supporters of anarchism, making such a tattoo on their skin, declare their nonconformity and love for freedom. They want to live without paying attention to other people’s opinions.

What does this image mean for men and women?

As a rule, this tattoo means that its owner is freedom-loving and independent. Such men show their individualism, unwillingness to submit to anyone, and will always defend their points of view.

But this image attracts women too. A woman with this tattoo is a bright individuality who loves freedom, reject the establishment and does not desire to deal with any authority. Often she is impertinent and rebellious.

How to choose an image

Both men and women prefer drawings, made in the style “new school”. They are very colorful; at the request of the client the master can even make a convex tattoo. People who can be satisfied with a minimum choose the graphic style.

Very often the tattoo is accompanied with some inscriptions, for example, a very popular slogan “anarchy is the mother of order”, as well as images of the Death with a scythe, black crosses, clenched fists, knuckledusters, skulls.

You can choose either a color version of the tattoo or a black and white one, it depends on your wish. There are a great number of  sketches on the Internet that will help you to decide, what a tattoo to choose. Look at them!

You can place the tattoo on any part of your body. Some people make it on an open place, in such a way expressing their convictions. They want everyone to know about them. Others, more modest, hide the tattoo from strangers under their clothes, showing it only to their friends.