Home / The meaning of the Shark tattoo

The article is about tattoos, art history and particularly about shark tattoo. We will try to find out the meaning of the shark tattoo. Let’s get acquainted with the photos and pictures that will help to create a unique and original tattoo with the image of a shark.

Nowadays a tattoo doesn’t impress anybody: a lot of people have this fashionable and stylish decoration on their bodies. So where did the concept of “TATU” come from? 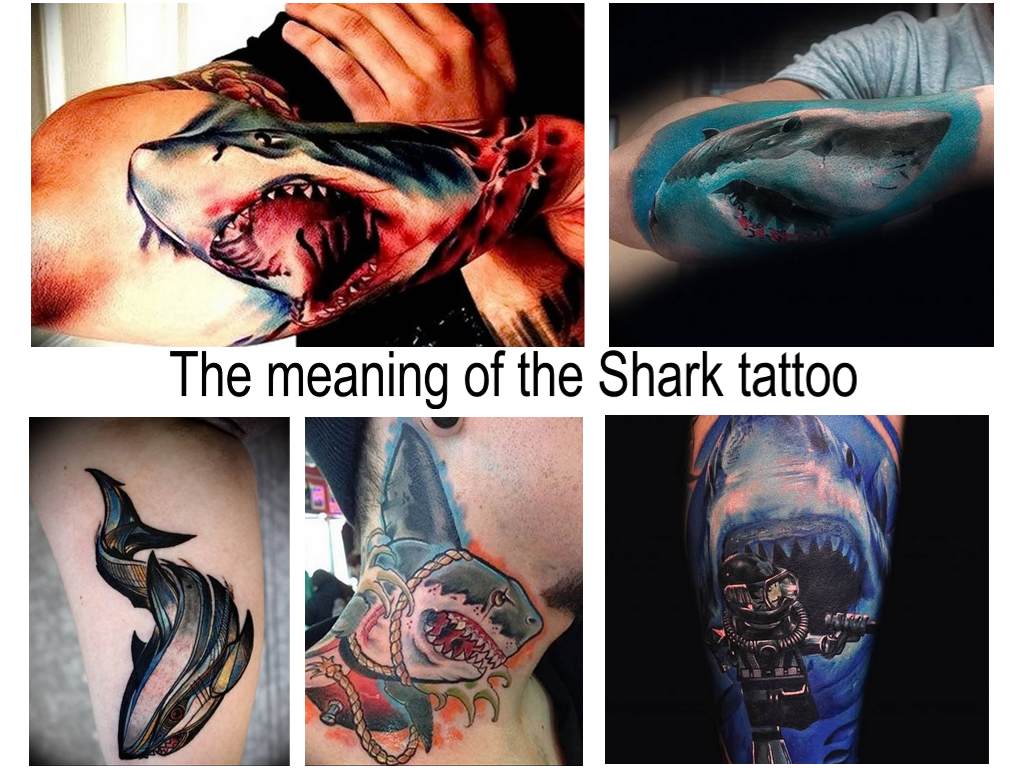 The meaning of tattoos

The first tattoos have already appeared in primitive society. They were not a decoration, but they showed information about a person. A tattoo helped to determine one’s tribal affiliation, social position and even the most important event in one’s life. Tattoo art has arisen in the southern countries: Polynesia, Australia, New Zealand.

The word “Tattoo” was brought to Europe by the famous traveler James Cook. In the Polynesian language and in the Tahitian dialect the word “tatau” means “picture”.

Nowadays a tattoo is rather a decoration, but it helps to emphasize one’s personality, personal traits and aspirations.

One of the popular tattoos for today is the shark. But what does it mean?

The meaning of a shark tattoo

In the mythology of many peoples this quick and dexterous ocean predator often acts as a deity or a patron. And for some tribes a shark was an insidious evil spirit. Therefore, the symbol of the shark in the tattoos served as a protection against predators and enemies.

There is a legend about one of the queen-ancestors of the Hawaiian tribe whose leg was seized by a shark. Miraculously she escaped. Since then, Hawaiian women have put shark tattoos on their ankles, as an amulet which helps to avoid such a meeting.

Photo examples of drawing a tattoo with a shark:

On the Australian continent sharks are treated with special respect: they are considered as a symbol that connects the Earth and the Sea. The cult of sacred sharks has spread from Indonesia, South China, Vietnam and Japan.

A shark is one of the most dangerous predators in the world, so a shark tattoo can mean fury and fearlessness, power and grace. It is most suitable for self-confident and purposeful people. But such tattoos can be of different types. For example, if the predator has an aggressive appearance, the owner of the tattoo can be cruel and cunning.

A tattoo with an image of shark can mean perseverance and grip, seriousness and purpose. It is a symbol of successful business, or incredible success in gambling. This tattoo is also a symbol of power and superiority over the opponent.

In general, shark tattoos are often put by sailors and fishermen. They show their fearlessness and are also considered as a powerful amulet.

Sharks… some of the most ancient creatures on earth, powerful, graceful creatures, bloodthirsty predators, ideal killers. So what does their image on one’s body mean? Power, fearlessness, strength and energy. Purposefulness, assertiveness, intelligence, gracefulness and speed, or just a protective amulet bringing good luck, keeping from troubles and giving self-confidence.

The text of the article is prepared by: tatyana_leb (Татьяна)