Home / The meaning of the tattoo Ganesha

This material on our site will help you to learn the most important things about the meaning of the tattoo “Ganesha”, give you examples of tattoo designs, describe their meaning, history and interpretation. You can see more examples here: 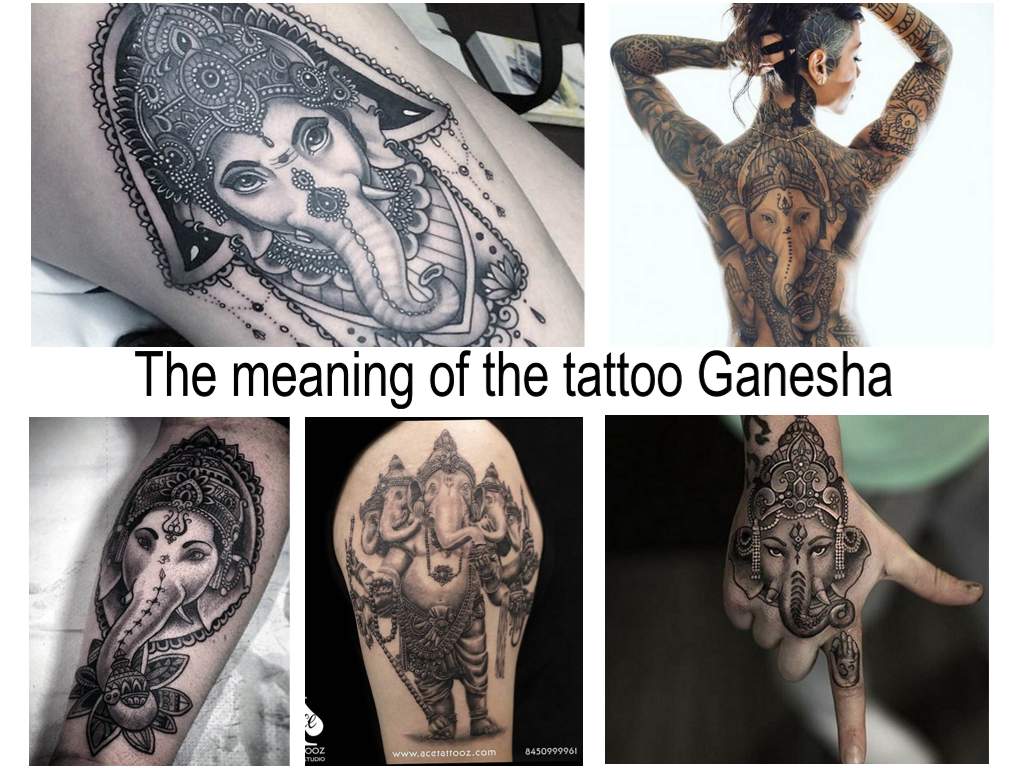 Interesting facts about the interpretation, history and meaning of the Ganesha tattoo.

Today, tattoos with Buddhist symbols are popular all over the world. These images act as powerful protective talismans and symbolize work on oneself. One of the most famous Indian gods is Ganesha. He rarely appears in tattoos because he looks very unattractive for unknowing people. The deity is depicted as a man with a big belly, many arms and an elephant’s head, with one tusk. However, those who are familiar with Eastern traditions are not afraid of the eccentric drawing at all. So what is the essence and meaning of the Ganesha tattoo and why is it chosen not only by monks and believers?

Hidden meaning of the Ganesha tattoo.

People believe that the Ganesha tattoo can attract good energy. The carrier of this image will receive strength, stability, wisdom, prosperity, and development of creative potential. In addition, the symbol is a guide to wealth. Ganesha is called the god of abundance and patron of the business. He will eliminate any obstacles to success and give you the ability to make good decisions.

Ganesha looks in such an interesting way for a reason; each of the parts of his body has its own secret meaning:

The number of arms of the deity varies between 2 and 32. But most Ganesha is depicted with 4 arms, which symbolizes 4 goals of human life (purushartha) – emotional pleasures (kama), material well-being (artha), performance of duties (dharma), release from the cycle of rebirth (moksha).

He can hold various items in his hands:

Most often this image is chosen by people who strive for financial well-being and success. But the fair Ganesha will not help those who have evil or greedy thoughts.

Photo examples of tattoos with a pattern of Ganesh:

Variants and technique of execution.

The Ganesha tattoo is characterized by a large number of elements, so the image must be large-scale. It is best to apply the image on the arm, back, stomach. It should not be tattooed on the lower back, ankles and in intimate places, because it is considered disrespectful to the deity. There are no restrictions on the color range. Vivid images where different colors are used look very attractive and fancy. The drawings made in monochrome technology are also good; they give solidity and seriousness to the owner. The most popular designs are with Ganesha sitting in the Sukhasana pose (asana in yoga), but you can also see him dancing or riding a rat, as well as the head of a deity shown separately, without a body.

The Ganesha tattoo carries a pure and positive energy. The person who chooses it will receive a unique, fascinating, oriental-style talisman. It is equally good for both men and women. If you have chosen this tattoo, you should find an experienced master who can draw a lot of details and won’t lose the sacred meaning and symbolism of the image. With proper execution, the drawing will be a real masterpiece.

Photos and pictures of tattoos on conditioning The mirror tattoo meaning