Home / The meaning of the tattoo Gorilla

The page will help you learn more about the meaning of the gorilla tattoo, introduce its most popular designs, describe its history, value and interpretation. More examples can be found here: 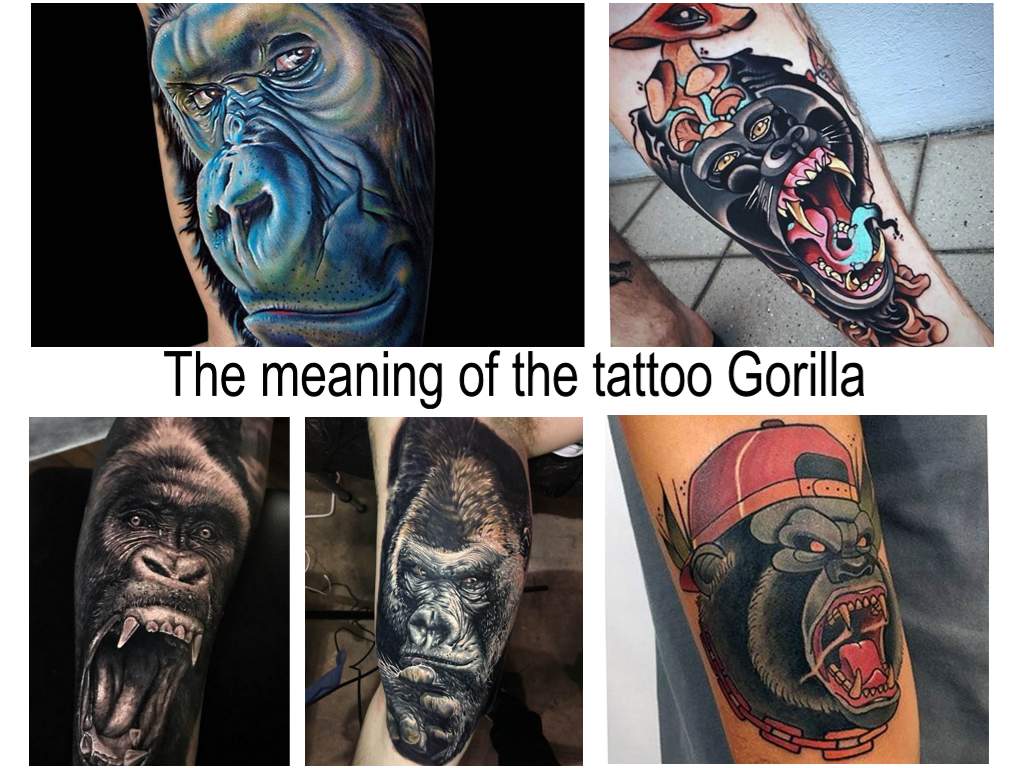 Depicting various animals on tattoos is a tradition originated from ancient times. It was a kind of tribute to totems, which our ancestors worshipped and revered. Of course, the original meaning of these images has been partially lost, however, the popularity and demand for animal tattoos today is growing exponentially.

The gorilla tattoo, as well as a picture of any other primate, can symbolize different and even radically opposite things. And this is no wonder, since different cultures and beliefs attributed to monkeys the most diverse and contradictory properties. For example, the ancient Europeans associated a monkey image with something straightforward negative and dark. For them, monkeys, and especially the gorilla were a symbol of sin, fear, laziness, uncontrollable strength and deception. The East, on the contrary, saw monkeys in a very positive light and attached bright qualities to its image – courage, intellect, sense of humor, unlimited devotion, and resilience.

Today, the situation is almost the same. That is why, if you choose the image of a gorilla for your tattoo, you should take into account that representatives of different traditions and religions have completely different associations towards the image of this magnificent animal.

Actually, the meaning of the gorilla tattoo can change according to its style. A lot depends on the position in which the gorilla is depicted, its emotional state and the naturalism of the drawing.

In other words, if the monkey picture is as realistic as possible, with a threatening expression on its face, standing on all four limbs and ready to attack, the tattoo certainly symbolizes aggression and power.

If the gorilla is depicted in a peaceful state, thinking about something, it can be perceived as a symbol of wisdom and intelligence.

A cartoon image of a cheerful easy-going monkey makes the tattoo look more ironically, with a bit of humor.

Anyway, in the overwhelming majority of cases, any image of a gorilla, regardless of its stylization and traditional affiliation, has stable characteristic values ​​- strength, authority, power, willfulness, and will to win.

Photo examples of drawing a tattoo with a gorilla:

You can put a gorilla tattoo on almost any part of your body. Of course, due to the massiveness and formidable nature of this animal, the tattoo will look the most beneficially and rationally on the back or chest. The shoulder is also a great place for such picture.

Images of the gorilla are usually chosen by men, but determined and ambitious women are also not against putting the image of this animal on their body to show others their toughness and confidence.

The Meaning of a Bow Tattoo Demon – Tattoo Meaning

The meaning of an 8 number tattoo The mirror tattoo meaning