Home / The meaning of the Star of David tattoo

The Star of David tattoo meaning, all you need to know about it and its samples.

The hexangular Star of David is considered being one of the oldest and the most mysterious symbols in the whole world. The fact that scientists all over the world used to find and still do find ancient objects with hexagram images on them proves it. Hexagram has a lot of names, it is also called «the Star of David», «Solomon’s seal» and «Magen David». But there are even more meanings and implications of it. Regardless of its old and mysterious history it’s widely used nowadays. Israel’s state flag with the Star of David on it doubtlessly proves this fact. 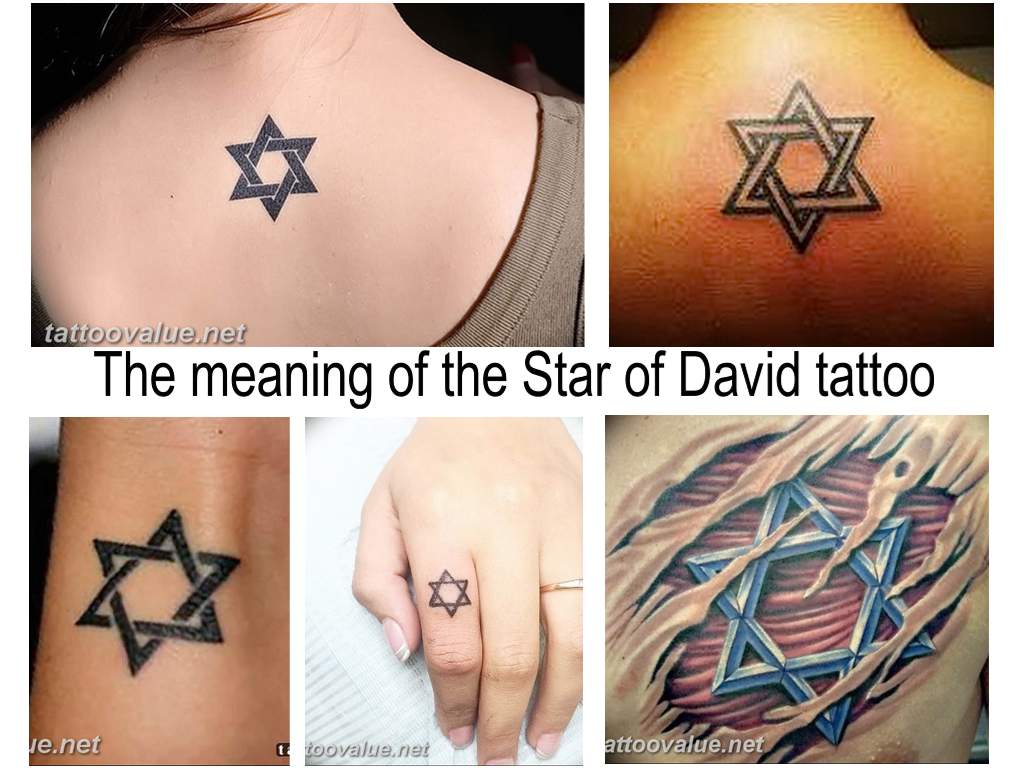 What does a Star of David tattoo mean – pictures.

Some people are in the mistaken belief that the Star of David is solely a Jewish community symbol. Of course, a hexagram is a symbol of Judaism, but the truth is that its images can be found in all the confessions. In olden times only priests and monks could have a hexagram image on their bodies. Those having such an image on their bodies  were considered to belong to a privileged caste and as close to God as no one else is. The Star of David symbol’s not permitted application was considered being impudent and blasphemous.

What does the Star of David tattoo mean?

The Star of David image is widespread among tattoo makers. This symbol even has its own history. In the 1950 – s a book explaining the most popular for that time tattoo meanings was released in France. The book said that this type of tattoo was mostly applied by seamen. They believed that this symbol was a kind of amulet for them and helped them come back from long – term navigations safe and sound. Approximately at the same time Russian scoundrels used to have themselves tattooed by quadrangular stars, stellas octangular and the Stars of David as well. They wanted to show their disagreement with that time’s political regime. People having such type of tattoo on their bodies were held in respect among prisoners, while applying a hexagram without permission was not allowed, and those who did it were punished and could even be killed. The Stars of David were usually applied on a breast or shoulders. This tradition still echoes nowadays.

Photo examples of tattoo designs with the star of David:

Hexagram tattoos are very popular today as well. One theory is that the Star of David symbolises harmony between the physical world (an upcast triangle) and the unseen (a downcast triangle): two triangles set together shape an organic whole. A hexagram image is also said to be the male principle and the female principles’ union symbol. In this explanation the Star of David meaning becomes similar to the famous Chinese mythological black – and – white yin and yang symbols. But it’s not that simple. The thing is that a hexagram is not only appeasement, tranquility and harmony symbol, it’s also said to be satanic.

This satanic meaning is explained by a hexagram symbolising a Number of the Beast 666 as it has six triangles, six corners and the internal hexagon’s six sides. It’s remarkable how many mutually antithetical meanings can one and the same symbol have. Nevertheless one thing is quite clear: a hexagram is a powerfull symbol with its own emanation of positive or negative biological energy. And this is to be taken into account before having such symbol on one’s body made. One who is determined to have such type of tattoo made has to think it out thoroughly, read more information about it and weigh up the pros and cons.

The text of the article was prepared by: regina-etxt-1 (Regina)

The Meaning of a Ballet Dancer Tattoo

The meaning of the tattoo “Infinity” Demon – Tattoo Meaning