Home / The meaning of the tattoo Scales

We suggest you to get acquainted with the information about the value of the tattoo “scales”, to learn the meaning and history of this pattern in the tattoo. For those who want to learn more, we offer the following additional pages of the site to view: 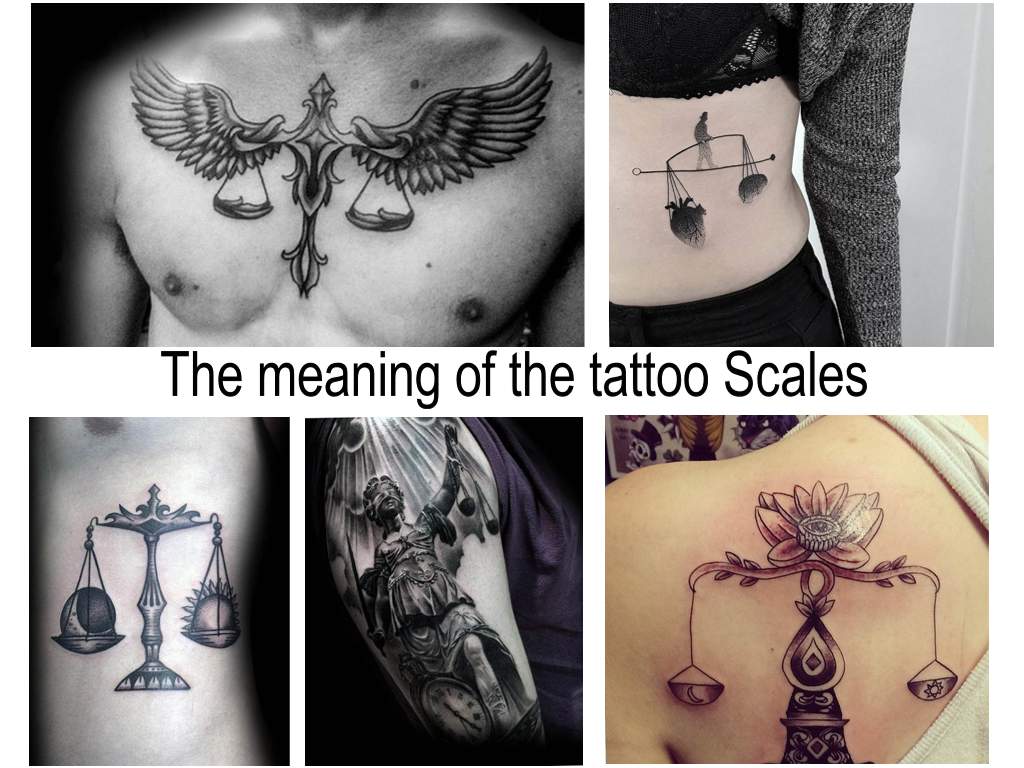 Interesting facts about the meaning of the tattoo “scales”.

Tattoos have long been a way of expression. People put various pictures on their own bodies to demonstrate a certain trait of their personality to the whole world.

Tattoos depicting scales were relevant at all times. Due to the multiplicity of its meaning, the symbol of weights is widespread among those who want to stand out from the crowd and open the whole world to themselves.

This article will be useful to those who already have the scales tattoo, and those who are just planning to decorate their skin with such pattern.

Possible meanings of the scales tattoo.

Originally, this tattoo was the embodiment of the only inanimate sign of the zodiac. Later, the symbol of scales has become multifaceted, so today it has different interpretations and can be perceived in different ways. This is a part of its charm: every person can choose whatever is to their liking. Then the scales tattoo will acquire its individuality, and the secret of this image will be known only to its wearer.

The most common meanings of the weights include the following:

Many people are proud to be born under the constellation of Libra. The fact is that the sign of the zodiac grants each individual a special trait, allowing them to stand out from the general environment. Thus, cultural figures, romantics, creators, and poets are often born under the Libra. They feel the creativity and make a tattoo of scales trying to show others their uniqueness.

By putting a scale on their skin, people with a keen sense of justice demonstrate their position in life to the whole world. In this case, it is clear that the tattoo owner does not tolerate lies and hypocrisy, and appreciates sincerity and kindness in other people.

The items placed on the scales help to understand a person’s nature, views and preferences. For example, when the heart lying on one bowl outweighs, we can talk about how great the value of love is in the life of a given person.

If the device is in a state of equilibrium, a person is in complete peace of mind, and his or her spirit is unshakable. If the empty scales are skewed, it can mean an internal imbalance, contradiction of one’s own convictions, disagreement with oneself.

Scales is a device that helps to weigh the pros and cons. When a person wants to find their own way, they carefully consider any decision, as if weighing it. The image of the scales in this case will remind its owner of its main goal.

Who is this tattoo for?

The scales tattoo will be a good choice for people focused on their inner world and on their personal experiences. Creative people and sensitive romantics can also embrace this symbol and use it for self-expression.

A tattoo depicting scales has become an attribute of a person who is in search of their true self.

The Meaning of the Volos Tattoo The mirror tattoo meaning