Our eyes allow us to perceive the world visually and distinguish colors and shapes. It is an important gift of our life. That is why the “Eye” tattoo is extremely popular. This visual organ is commonly tattooed on humans’ bodies as a part of complex picture or alone. And every single tattoo has its own sacred meaning. 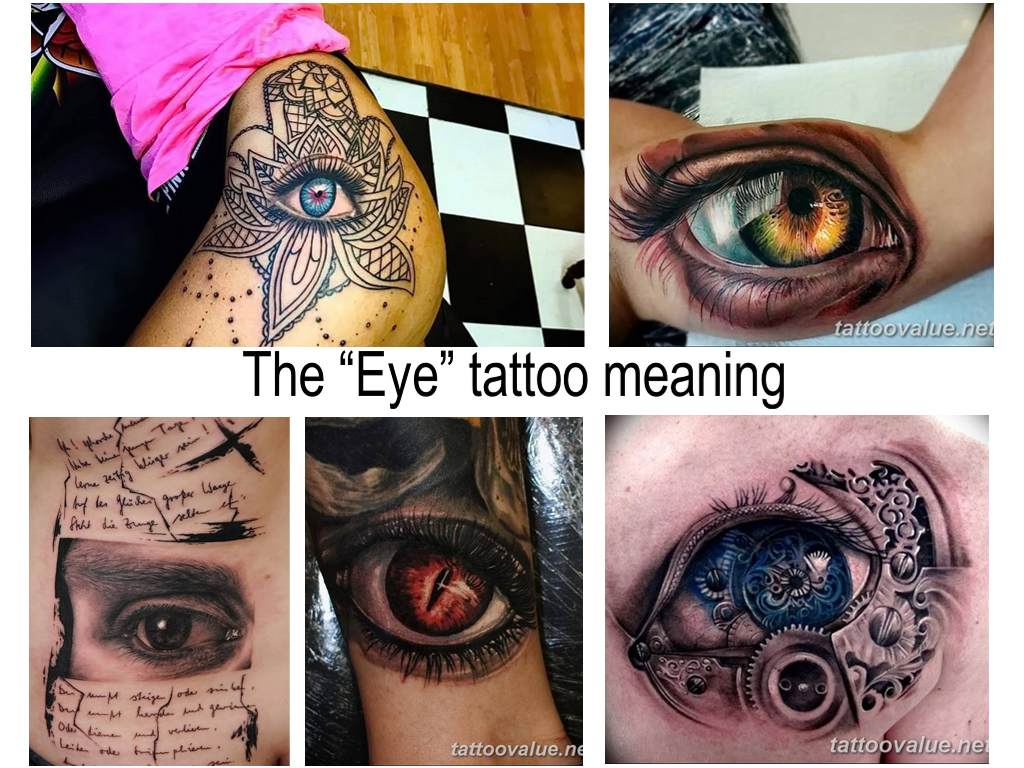 Meanings of the “Eye” tattoo may significantly differ. It depends on the particular tattoo-image  where eyes are depicted. Also your tattoo may have other meanings according to your sex. Some statistics say, that men choose a tattoe which includes eyes more often than women. Men prefer tattoos with eyes on the chest, it brings them protection. Women always imply a romantic message in every tattoo, so with the help of the “eye” tattoo women try to show their gentle nature. Nevertheless, a man or a woman chooses to get a tattoo somewhere where it will be seen by others, it means they want to assure everybody they are open to them.

But still in the broad sense, tattoo with eyes’ image is a talisman, symbolizing knowledge, power or mighty God.

Such symbolical meaning of this sign has been known since the ancient times. Centuries ago it was common to believe that soul enters body just through eyes. Another reason why images of the visual organ was so frequent is that people tried to protect themselves from any potential enemies, even beasts. In this case people put the image of the eye on their backs, shoulders, necks and even heads. This image was a “third eye”, a way to see what or who can not be seen.

This simple but still deep in meaning tattoo has one clear implication related to vision function of eyes: a person with this tattoo has his own view of the world.

Different tattoos with eye as a part of it.

The meaning of a tattoo may vary depending on what place an eye has in a big tattoo composition, or how an independent image of eye is depicted itself. For example, one of the most popular tattoos with eyes is an eye in a triangle. “The eye in the triangle” tattoo symbolizes the divine Trinity and faith in it. “The pyramid with the eye” tattoo means wisdom, superior knowledge, spirituality and so on. However, both of these tattoos may also symbolize secret membership such as Masonry. “The left eye of Horus”, the egyptian god of the sky and the sun – is the another famous “eye” tattoe. Some of its popular meanings are the ability for the tattoe’s owner to see the real world, truth and other peoples’ secrets. The other name for the eye of Horus is Wedjat, or the eye of Ra. The sign of an eye with some tears under it is quite often tattooed as well. And sometimes the “tear” tattoo is made under real persons’ eye. Such tattooed image means a regret for what was done. A person, who has this tattoo, repents of something.

The meanings of eyes’ tattoos can be not so good though. For example, “the eye in the triangle” tattoo gets the negative meaning when this image is put on the girls’ wrist. This way it is a mark of lesbians.

If to go behind the stereotypes, the symbolism of the “eye” tattoo can be very different, because the true meaning of a chosen tattoe depends on what sence you imply yourself in it. Eyes show various feelings, emotions, certain state of mind. Eventually, eyes depicted on a tattoo may represent eyes of a beloved ones for a person who got such picture on their body.

Made with the use of various art styles, images of eyes can be tattooed on different parts of body. Some tattoos with eyes in the realistic style can be made in great detail, so that such tattoo may resemble a photograph rather than a picture on human body.

The text of the article was prepared: ellieinred (Polina Morozova)