Home / The meaning of the tattoo wings of Hermes

In this article we will break down all the information we have on the the meaning of Hermès Wings tattoo design. We are going to analyze popular design examples, their history and readings. Additionally: 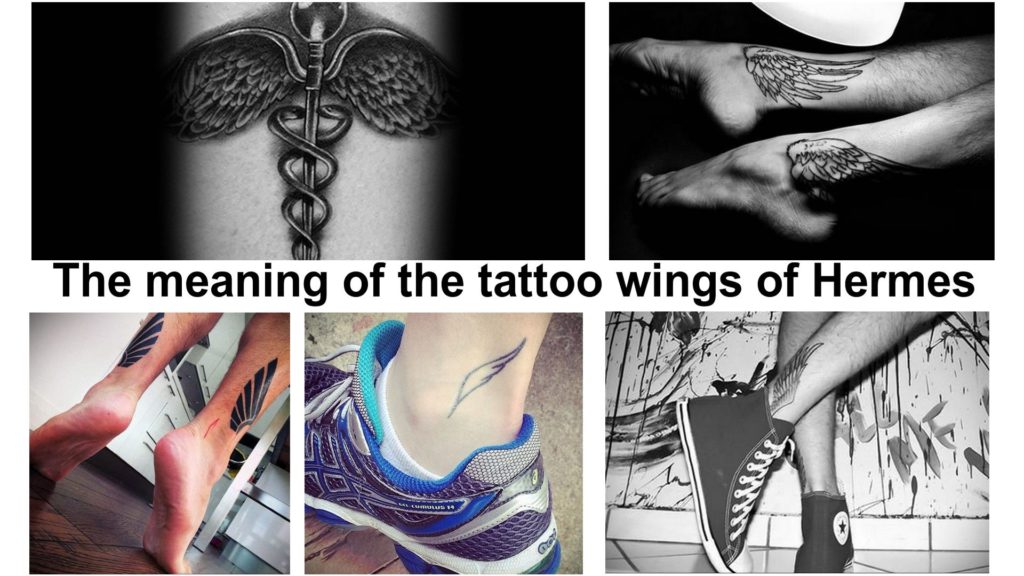 Interesting facts on the history, interpretation and meaning of Hermès Wings tattoo design

A dream of flying in the sky has been shared by generations of humans for many centuries. Even now, having all of the sophisticated machinery, people wish natural flight. Wings are an eternal desire for the humanity. To get closer to their dream and to the sky some of us decide to put images of wings under our skin – alongside with tattoo ink.

The sight of tattooed wings makes everyone think of something unearthly, sophisticated and mythical. On the one hand, it has to do to with our religious knowledge and experience as wings are usually worn by angels and entities close to god. Almost every world religion has anthropomorphic characters gifted with wings to indicate their heavenly origin. On the other hand, wings are also worn by ancient gods – such as Hermès. The messenger god had several pairs of small wings attached to his hat, sandals and caduceus.

Each tattoo design has it’s own unique meaning. But no less importance is it’s location on the body. In old times wings were associated with faith and religion. Angel wing used to symbolize the greatness and power of the man wearing them. Modern wing-shaped tattoos have very different list of meaning.

Here are some of them:

Mass media workers love Hermès Wings tattoo design as it’s a symbol of a witty, inventive, quick and strong personality – the traits shared by the Hermès himself. A picture (usually one of a small size) is often tattooed on ankles.

But there is another way to interpret the image of wings pictured on one’s leg. Hermès Wings also mean strong will and determination in getting back freedom once taken.

Sometimes little winged heart may be tattooed on a hip or an ankle. This obviously means love. Some people also choose to write a name of their beloved one between two wings. A broken heart made of two or many pieces means disappointment in love and relationships.

Ancient god has also had his caduceus decorated with wings. It looks like a stick with two coalescing snakes wrapping their bodies around it.

This tattoo design can be interpreted as a merge between the good and the evil, especially if one snake is painted in dark colors and the other one is light. Also serpents represent deep wisdom.

As Hermes Wings represent freedom and ability to overcome all borders and boundaries, such caduceus had always been worn by peacekeepers and used to be their main attribute.

Stick is considered to be a symbol of power. At first there were two green branches wrapping around it, but later their tops turned into wings, and the rests of both branches now appear to be serpents. Additionally the stick can be seen as the world axis with two snakes representing to basic opposites, like yin and yang in taoism. With a stick being a word axis, wings represent all the higher and heavenly thing and a pair of serpents stands for a thin balance in a constant and eternal fight between the forces of the darkness and the light.

Mainly people who decided on this tattoo design choose such body places as shoulders, ankles, or hips. It’s usually made in a monochromatic, much less often in a colorful palette. A lot of tattoo designs of Hermès Wings and Caduceus can be found on the Internet.