Home / The meaning of the tattoo “dove”

Here you can find out all the most interesting and important things about the meaning of pigeon tattoo, variants and peculiarities of the drawings that are popular in modern tattoo. Look at the sketches and photos of the finished tattoo. More examples here: 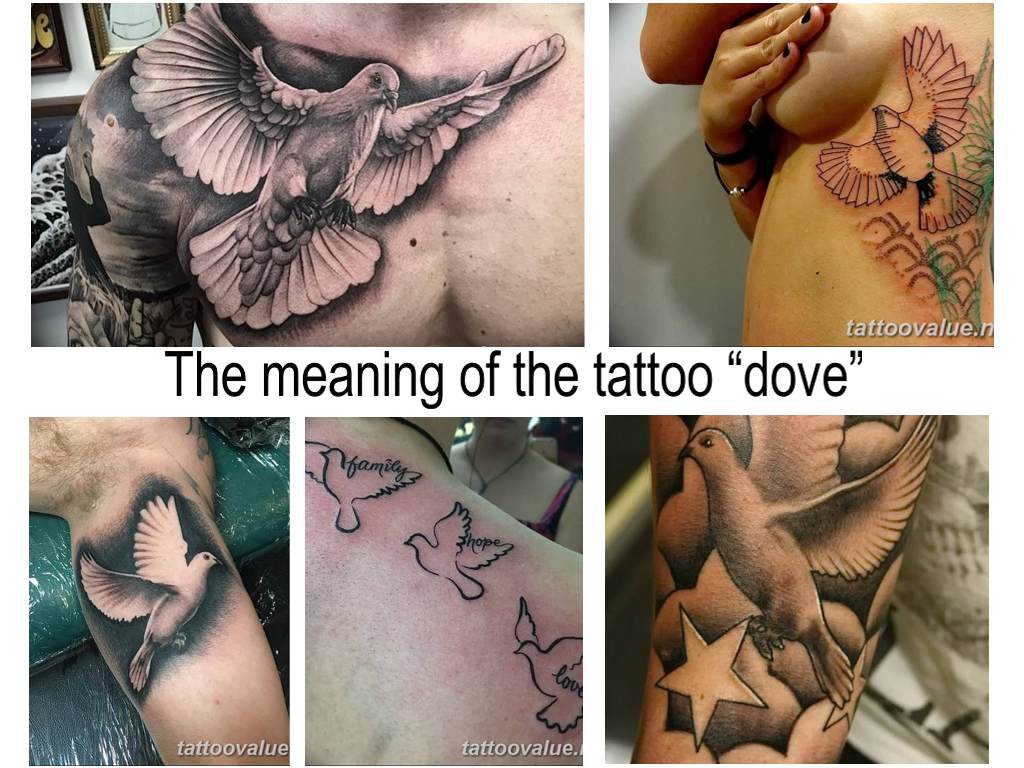 We usually associate birds with freedom, independence and inaccessibility. Each person is trying on certain qualities of a bird.

The images of birds are very popular in tattoo art, as they have a positive energy and good vibes. The dove is one of the most popular bird tattoos. After all, the dove is known to be a symbol of goodness, peace and hope.

The dove is the most popular in Christian culture, because this bird is a symbol of the Holy Spirit.

The number of doves in the tattoo.

The meaning of the tattoo can be interpreted according to the number of birds in the picture. From this perspective, there are three meanings:

the meaning of the tattoo depicting the dove pair – a strong, friendly and loyal family;

a group of birds – it unites all believers.

Thus, any number of doves is a good symbol.

Branches in the dove’s mouth.

Among tattoos, there are those showing the bird with an olive and palm branches in its beak. The olive branch refers to the biblical flood. It is known that the dove brought olives to Noah as a sign that the water will soon drain. The palm branch symbolizes victory over death.

The image of a dove in the cultures of different nations

Sumerians believed that the pigeon is associated with sexual harmony and voluptuousness.

Photo examples of finished drawings of the dove tattoos:

In Sumerian mythology, Ishtar was the goddess of love, like Aphrodite in Greece and Venus in Rome. Therefore, the dove, as a companion of these women, symbolizes carnal love and the childbirth.

Chinese culture also appeals to love, considering the dove to be a symbol of spring, Mother Earth and loyalty.

In Japan, the dove is a symbol of the beginning of the war. It was believed that the pigeon begins the war, and the dove carrying the sword of the peace ends it.

Jews call the dove a bird of purity. The doves were often used in the purification of the soul as a sacrifice. In the Old Testament, the bird was endowed with the spirit of innocence and purity. In this regard, it personifies the soul of a deceased person.

For Iran, the dove is the Supreme Being.

For the Minoan culture, it is the bird of the great Mother Goddess.

Hinduism believes that pigeons are heralds of the god of the dead. Islam refers to the dove as the holy maiden. There are images of three dove on the columns. This means three holy maidens.

In Freemasonry, the pigeon also stood as a symbol of purity and innocent virgins.

One of the Indian legends says that the soul of a loving person is encaged in doves.

As we see, the dove as a symbol was used in all cultures and carried only auspicious meaning, kindness, love and faith. This bird acts as a talisman against evil forces.

Do not forget that each person sees their own meaning in the dove. For the prisoner it is freedom and independence, for the lovesick – the family, love, children. For the sinner, the dove is a symbol, and maybe the last chance to atone for his sins and purify his soul.

After deciding exactly which dove you want to put in the form of a tattoo, decide what it means to you. This bird and the dove tattoo will become a faithful companion in your life, your talisman, symbol and protection.