Home / The Meaning of the Military Tattoos 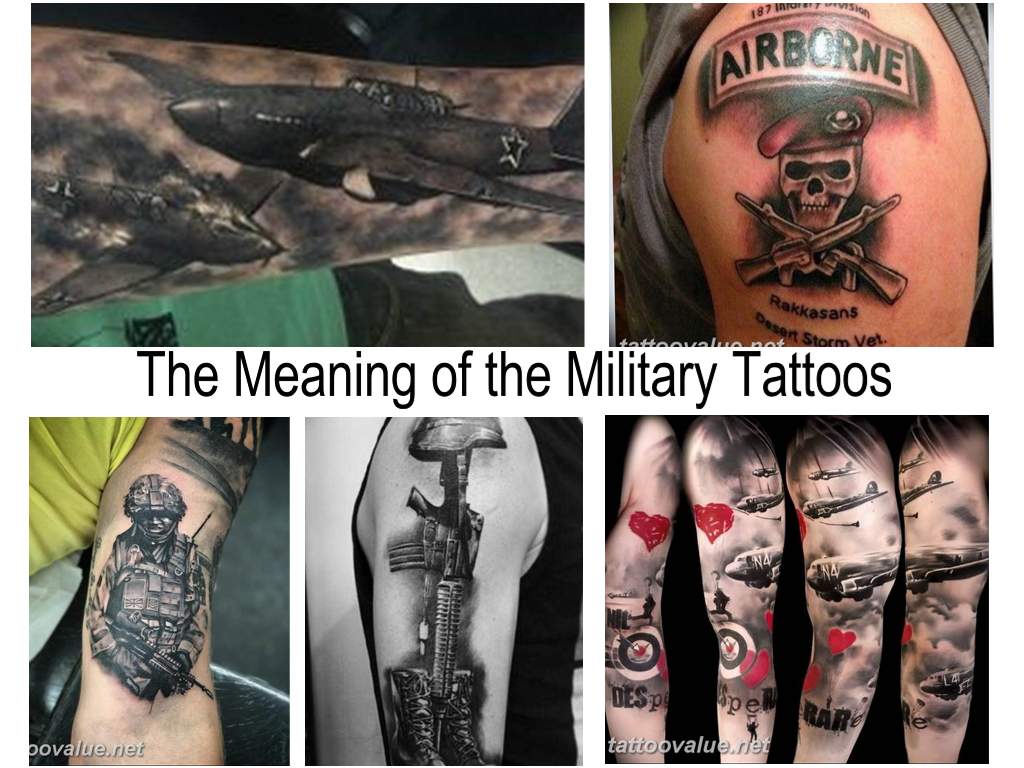 What is the meaning of the military tattoos?

The category of military tattoos is related to people who are performing military service or have already served in the army. The intention of the military to put images on their bodies can be explained by the desire to protect themselves or the need to identify them after death. So a blood type tattoo can save a soldier’s life while being wounded. It is believed that it were tattoos with blood type symbols that became the ancestors of other body pictures with practical meaning. For example, there may be an inscription near the blood group tattoo as a clue about diseases, diabetes, allergies, etc for medics. Such inscriptions are put on the shoulder, wrist, but most often on the chest.

The military have their own traditions in tattooing. The meaning of military tattoos depends on the military occupation. For example, commandos apply a picture of a skull or a predator; snipers depict a terrorist in an optic sight, scouts go for a bat or an owl. The meaning of a military tattoo may also be based on the type of troops. Certain symbols of discrimination in the image help determine to which troop the soldier belongs.

The air assault forces depict a parachute, a winged sword with a beret on the shield, the emblem of the Airborne Forces. Tattoo of the airborne troops often shows the grin of a tiger, bear, wolf, leopard or panther. The predator can be depicted wearing a blue beret. The tattoo can also feature a skull in the beret. A very beautiful picture is a parachutist with a parachute breaking out against a plane flying away in the background. Please take a look at the different versions of drawings.

What do military navy and intelligence tattoos mean?

The Navy depicts an anchor against the globe, a ship, a submarine, sailboats, a steering wheel, a dolphin jumping out of the waves, a wind rose or an inscription “For the Navy!” on the edge of the hand. As with airborne army tattoos, marines can put a skull, a predator in a black beret, or a simple ribbon tattoo with the inscription “Marines”.

The border troops apply symbols of border protection, namely, a shield and a sword. The shield can be drawn with the abbreviation BT and the star. A border guard’s tattoo may have a green beret, border posts, a guard tower, or a landscape consisting of mountains. Also, a border guard tattoo can depict an eagle or a scorpion.

The symbol of intelligence and special purpose troops is a bat on a dark background that represents the night. A tattoo of a bat can be accompanied by the moon, skulls in the berets or some kind of landscape.

The simplest tattoos of the military are the image of the sleeve patch of their unit on the forearm. In some cases, soldiers are forbidden to make tattoos – for example, scouts, so that they won’t be recognized or new recruits until a certain period of service has passed. Military tattoos have great meaning and life value. The military tattoo can’t be done just for kicks, it must be earned.