Home / The meaning of shackles tattoo

The material will help to study the meaning of the shackles tattoo, offer for viewing modern drawings, describe their meaning, interpretation and history. More examples you can see here: 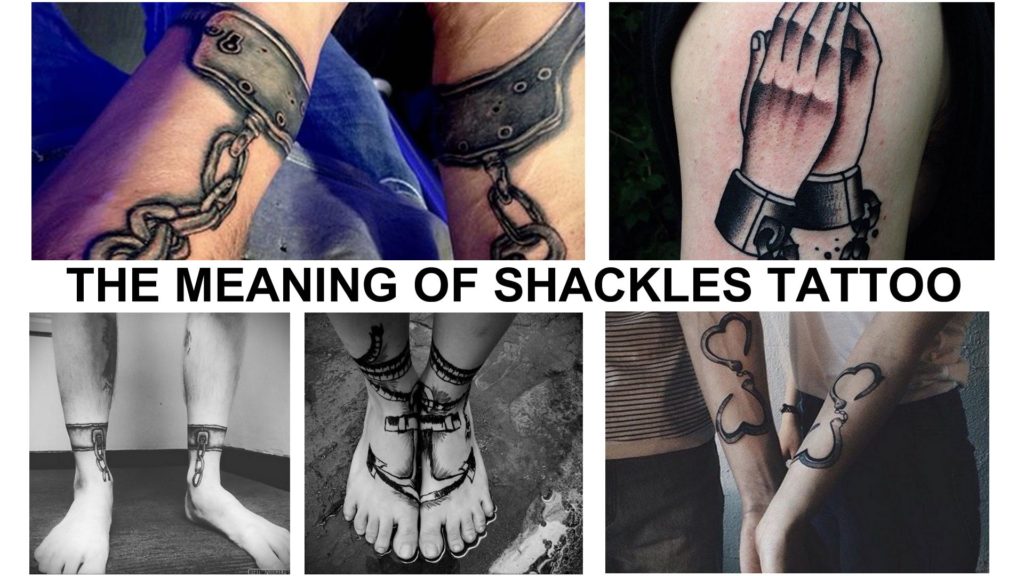 Something interesting about the meaning of the shackles tattoo

Nowadays the meanings of such tattoos no longer contain the philosophical meaning originally embedded in them. Young people get shackles tattoo to change their visual appearance. Shackles which are inked on woman’s hands or legs emphasize the fragility and grace of the woman’s body, and it has a very brutal appearance on the man’s body.

The semantic meaning of tattoo

For the first time the using of shackles in the form of tattoos began in prisons. The meaning of such an image was limited to the inevitable punishment of committed crimes. In Russian prisons only prisoners, who had served at least five years in detention, got shackles tattoo. Sometimes the length of the sentence can be determined by a chain attached to the shackles. One link will mean a year, half a link — six months. Besides, the adding of various items will change the ultimate meaning of the image, but at the same time reveal the biography of the person with this tattoo in details.

In another light, the meaning of a tattoo with shackles can bring a positive way. Shackles with torn chains look very symbolic. This way they act as a symbol of liberation and release from sins. Many young people who are members of informal youth movements use this tattoo as a symbol of autonomy, rebellion and independence.

Some people also see this image as a union sign or the people they are associated with. Young couples make the same tattoos with the adding of a person’s name to the shackles. In this way they represent eternal devotion to each other, connecting their destiny to the fate of this person forever.

Some people like the idea of using this tattoo as an amulet from prison, captivity and other troubles. They symbolize the shackles tattoo with torn chains with release.The semantic shades of the image can be emphasized with all kinds of additional objects such as ribbons, flowers and inscriptions.

Areas of the body suitable for applying the shackles tattoo are restricted to the ankle and wrists of the hands. Some brave people very rarely apply it on the neck as well. The place of the tattoo and the shape of the fetter will depend not only on the human building, but also on the meaning of the image.

For tattoo application it is possible to use colors of silver, gold and copper. Sometimes black color is used, because only it can convey the severity and mass of the fetter.

It is worth noting once again that in the criminal environment the tattoo with the image of shackles is a distinctive sign with its peculiar meaning. Adding some objects to the shackles also has a certain sense.

The text of the article was prepared by: ALONA30 (Shashkova Alyona Nikolaevna)

The meaning of the tattoo Globe Demon – Tattoo Meaning

The meaning of the tattoo “dove” The umbrella tattoo meaning