Home / The meaning of the tattoo Harpy

In this article we will try to consider the meaning of the tattoo “Harpy” in detail – its history, purpose and popular versions of design, their interpretation. For those who think over the idea and select the tattoo design before going to the tattoo salon, we recommend going to the following catalog pages: 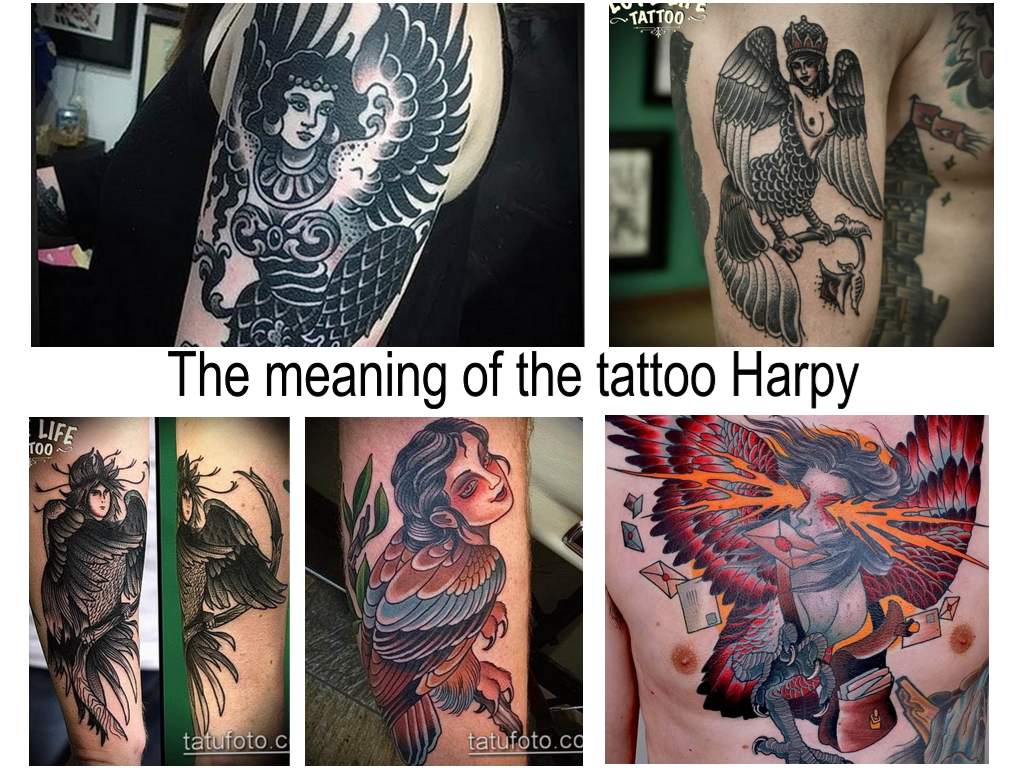 People strive to decorate their bodies with tattoos for a long time. Ancient Romans, Egyptians, Indians of different American tribes used to put signs in form of tattoos on their skin. But earlier people showed their occupations (hunter, warrior, shaman) through these signs or put various amulets on their bodies and believed they would help.

Who are the Harpies?

As you know, men often incline to the idea that all evil in the world has a face of a woman. One proof of this is the harpies. These are ancient mythological creatures with a female appearance (head, face, bare chest), with huge wings and strong legs of vultures. Their limbs have long, sharp, curved claws. Since ancient times, these semi-birds semi-women have been the personification of human vices (greed, gluttony). They are associated with whirlpools, storms and sudden death – the feminine essence of the destructive elements. Harpies are abductors of babies and human souls, demonic creatures that terrify all living things.

In ancient Greek mythology, the harpies were three sisters (Aello, Ocypete, Celaeno), daughters of the sea giant, the divine Thaumas, and the queen of the sea and river expanses, Oceanid Electra. Harpy sisters personified different elements – Aello (“vortex”), Ocypete (“swift”), Celaeno (“gloomy”). They unexpectedly attacked their victims and suddenly disappeared, like a whirlwind. Due to this suddenness, harpies are considered virtuosos of sudden death. The faces of the mythical half-birds half-women are always pale because of the hunger that always torments them, which explains their gluttony and greediness. The word ‘harpy’ itself means ‘grab’, ‘abduct’.

Photo examples of drawing a tattoo with a harpy:

The most famous story with harpies is the myth of the Argonauts, who hunt away the harpies and saved King Phineus, who was blinded by the gods for reliable predictions, from eternal torment. Disgusting creatures were faster than the wind; they flew to the king’s meal, took it away and ate, and what left was spoiled by the horrible stench.

Meaning of the Harpy tattoo.

Given all the above, it is obvious that the Harpy tattoo can have the following meanings and interpretations:

Harpy is a true symbol of human vices and sins.

The text of the article prepared: alex-summers (Алексей Сергеевич)