In this article one will be able to find out the meaning of tooth shaped tattoos, can have a look at tooth tattoo pictures and will aslo find out a tooth tattoo origin and meaning. More examples here: 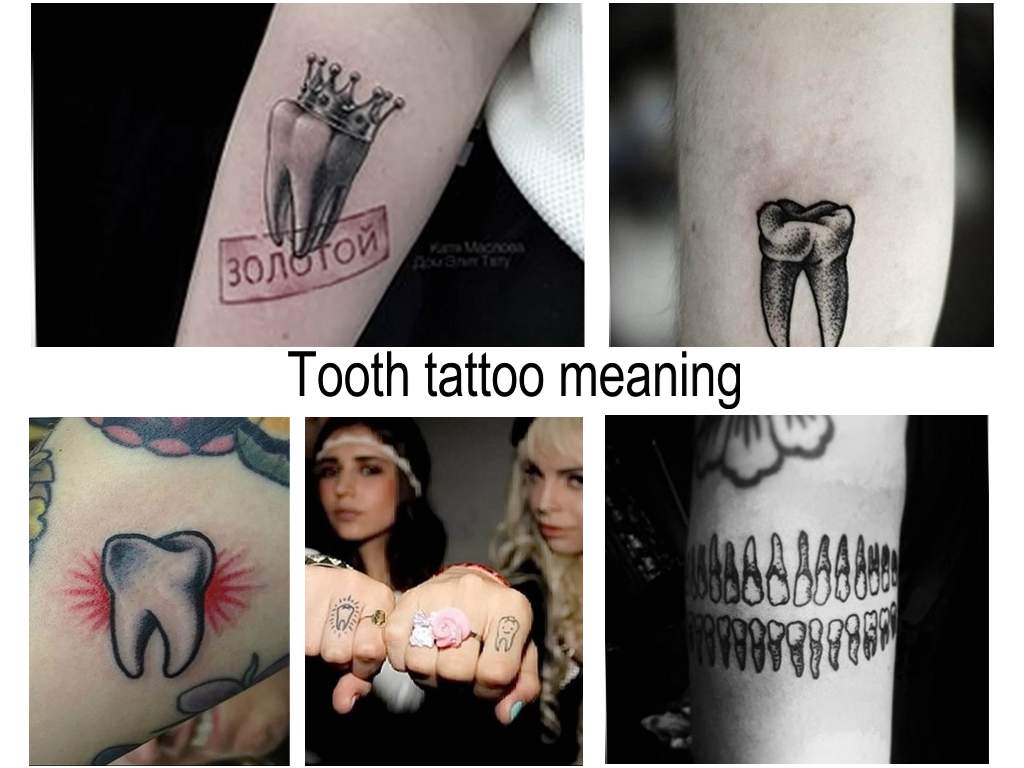 Interesting facts, meaning and origin of a tooth shaped tattoo.

There are a lot of amasing facts about tooth tattoos as there are particular reasons why some people have this type of a tattoo made. One can find out tooth tattoo`s various meanings and undermeanings.

As it turned out, it`s more likely for men to be tattooed by this type of a tattoo as they position themselves to be strong. And tooth tattoos are actually rare, they are not so popular among tattoo owners. When these types of tattoos are made they`re usually life – sized and do look real.  Tooth shaped tattoos are thought to be symbols of financial losses. But this fact is not to be paid so much attention at, because it`s not proven,  besides tooth tattoos actually mean protection, staunchness and determination, and are supposed to scary rivals.

So, what`s the actual meaning of a tooth tattoo?

A bare teeth animal`s jaw or a human eye tooth tattoo means some kind of warning for a rival and also means that a man wearing this type of a tattoo is ready to defend himself/herself to the last gasp. A tooth shaped tattoo is commonly found in people with men`s traits of character. It can be a man or a woman who is wearing such a tattoo. Severe, strong and tough people are more likely to love this type of a tattoo.

An upper jaw tattoo corresponds to supersubstantial ideas while a low jaw – to the physical world. Animals` teeth were used by our ancestors as a means of first cold steel. They didn`t have any other means of cold steel, and teeth helped them kill their enemies and animals.

The meaning of teeth and karma correspondence.

Being the hardest part of a body, a tooth symbolizes revival and its owner`s power potential.

Photo examples of drawing a tattoo with a tooth:

A tooth itself is considered to be an object of magic, that`s why some people keep a kid`s first tooth. They believe it has magical power that can help its owner in future. And it`s also not to be given to other people because if those people turn out to be evil and wishing something bad to the tooth owner they can cause him/her harm.

A man`s karma and teeth connection.

A man with beautiful white teeth is supposed to have good karma full of positive events, while the one with bad yellow teeth is believed to have to work hard on its karma and revive several times in his/her future lives. People with small distant teeth are said to be slack – happy while people with a «horse teeth» are supposed to be evil. But these are all relative concepts.

The way our ancestors esteemed teeth.

Long, long time ago people used to pay much more attention to everything surrounding them. Teeth were one of the most esteemed objects.

Mexican god Tlaloc is a rain and fertility god. He is wearing a crown with a tooth symbolizing rain.

Agni is a god and sizer. He symbolizes repeated teeth.

Christians used to laugh at their gods showing them their teeth as symbols of superiority and self confidence.

In astrology a tooth symbol is governed by a Capricorn dependent astrological sign.

If one is determined to have a tooth tattoo made it means that he/she is ready to defend his/her family to the last gasp. So, he/she is to think it over thoroughly before having such a tattoo made. And for people with good sence of humor having a tooth tattoo would be a comfort if they loose one of their own teeth.