Home / The meaning of a Jesus Christ tattoo

In the following article we are going to analyse the meaning of a Jesus Christ tattoo and talk about its history. Those who is interested in other types of tattoos can check on our catalogue before having one of them made. 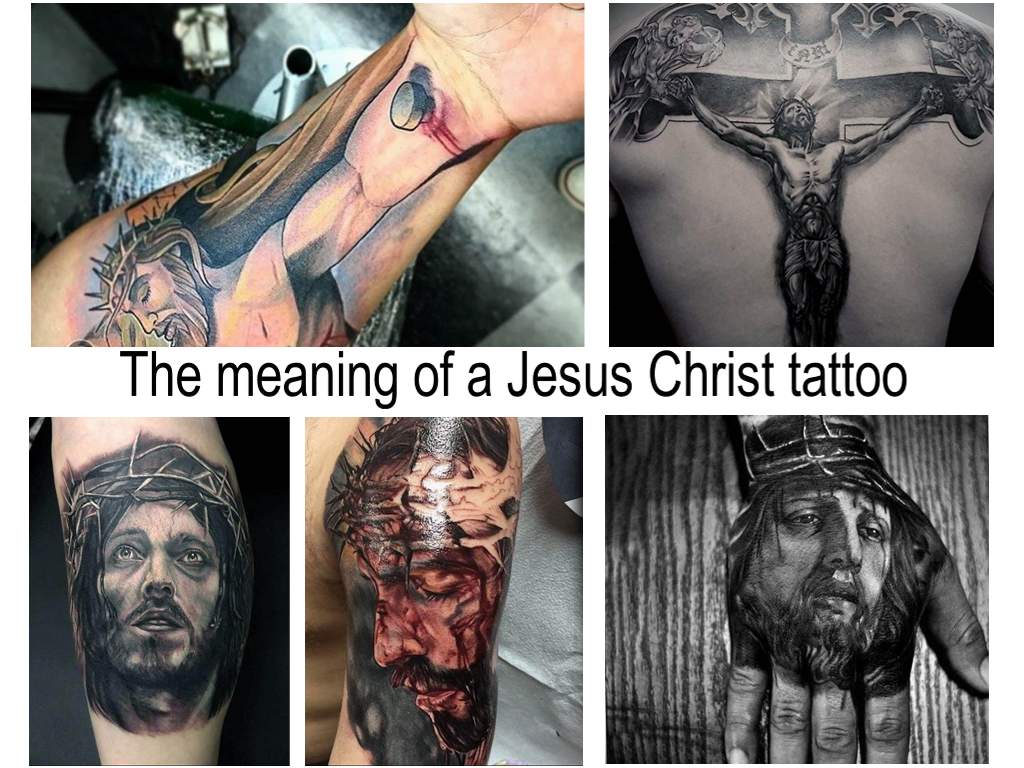 The meaning of a Jesus Christ tattoo and Jesus Christ images’ implications and pictures of already made tattoos.

The meaning, implication and history of a Jesus Christ tattoo.

Tattoo making tradition has its origin deep in Ancient times. Our ancestors used to have their bodies tattooed with the help of various means. Every image was believed to have some kind of magic power depending on the part of a body it was applied at. The tattoos were also believed to serve as their owners’ averters or protective amulets. Tattoos were used as a person’s status and profession markers as well.

The tattoos’ ability to mark a person’s status has been kept till nowadays. It’s just that the application methods, the tattoo substance and the images themselves have been improved.

All modern tattoos are subdivided into:

– those serving as decorations;

– those bringing a sense;

– those having definite criminal meaning.

There are a lot of different styles and types of tattoos nowadays. Jesus Christ tattoos are very popular as well. These types of tattoos even used to be prohibited long time ago. Jesus Christ tattoo sketches can be easily found in many social networking services, tattoo studios and catalogues. Jesus Christ on those images can be featured praying, wearing a crown of thorns or crucified. And if one is determined to have such kind of tattoo made, he/she is to know its meaning and the implication thoroughly.

This tattoo’s brief meaning is as follows.

– a person wearing this kind of tattoo is spiritual and a Christian;

– this person is willing to help and support his fellow creatures;

– a person wearing such a tattoo is most likely a sinful man.

This type of tattoo’s more profound meaning comprises eternity, serenity, wisdom, immortality. fairness and nobility. On the other hand it symbolises misery, making satisfaction for sins, raising from the dead and coming back to new life. Jesus Christ tattoo meaning is almost the same among all the nations and is considered being some kind of amulet from the evil. Such a tattoo is supposed to show love to the people surrounding the owner. Having such type of tattoo made means that a person would be eager to defend his/her family to the last gasp and sacrifice himself/herself and his/her own beliefs for the sake of his/her family and the supreme icons. However one who is determined to have this type of tattoo made is not to choose the image of Christ crucified as he/she is likely to come through the same suffering and misery Jesus Christ undertook.

Court prisoners have their own tattoo meanings, and they’re completely different from the generally accepted ones. Criminals used to have a God’s image applied on their bodies in order to protect themselves from the evil. During the Soviet period criminals having such tattoos on their breasts or shoulders were believed to be not willing to bend to the law.

While crucifixion was supposed to mean fairness and mind purity and was mostly applied on the breast. Jesus Christ image applied on the back symbolised conviction of his/her sins and  faith, hope and charity. Judging by the type of an image one could understand the reason of a person’s imprisonment, that’s a crown of thorns on the Jesus’ head means that the owner is in prison for the hooliganism.

If one is determined to have such a tattoo made, he/she is better to place it on the back or shoulder. While a small image will look good on the wrist as well. Anyway, he/she’d better consult a tattoo artist first.

The Meaning of the Vitruvian Man Tattoo The umbrella tattoo meaning