In this article we gathered all the most interesting and important things about the characteristics and variations of the tattoo design, the meaning, use and interpretation of the coffin tattoo. To see more examples, visit the following sections of the site: 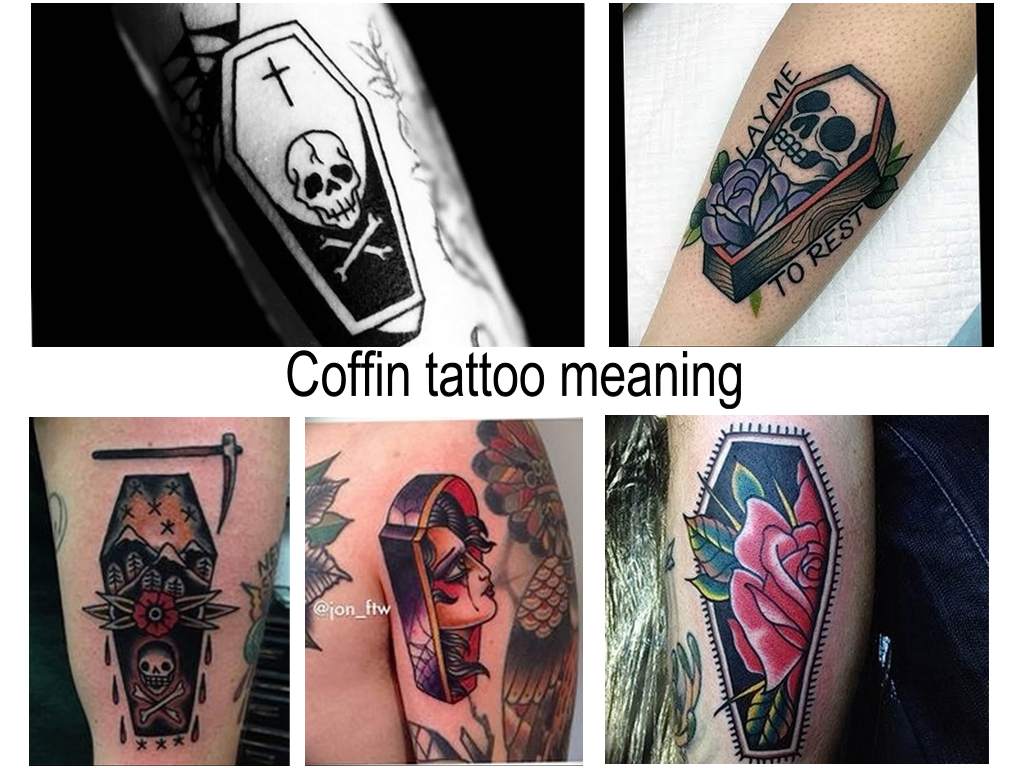 Coffin Tattoo – Interesting facts about its peculiarities, variants and meaning

For an ordinary person, a coffin is associated with death and the end of life. But is it, really? If you dig deeper, you can find many other interpretations of this symbol. Besides, its meaning is not as grim as you may have thought.

In the ancient mythology, the coffin was perceived as a mystical shell that protected a person. A cradle in the afterlife that promised a rebirth. Life after death is a common thing in myths. That’s why people used to believe that not only gods but also mere mortals can rise from the dead.

In various religions, the sarcophagus meant the new and perpetual dwelling. Also, this attribute was considered a necessary means for moving to another better world. The symbol of the grave served as a reminder that we all are mortal, so we must live a long happy life, make time to finish all of our business and to fulfill our purpose. The funeral attributes were often used in various initiation rituals to show that the person’s old personality died and was resurrected as someone completely new.

You may have not thought that you use various phrases referring to this symbol quite often. For example, when they say ‘to the grave’, they mean for a long time, forever, to infinity. Saying ‘may I see you in a coffin’ they express their contempt or indifference to something or someone. Everyone knows how a car is sarcastically called a coffin on wheels.

The most common meaning of such tattoo is the end of mortal life. For those who make it, it is a reminder that nothing is eternal on earth, and life can end at any moment. There is no time to relax, you must pursue your plans and dreams, live your life happily and cherish every moment.

Photo examples of a tattoo with a coffin:

The coffin tattoo can also imply the loss of a loved one. It expresses pain and suffering the person has been through. In such a way the person gives oath to remember their beloved and to be faithful to them to the end.

Someone who has decided to start a new life with a clean slate makes coffin tattoo with a completely different idea in mind – the idea of revival. It symbolizes leaving his old self in the past, forgotten. He becomes a new, better person who dreams for a happy, trouble-free life in the future.

People put the picture of the coffin on their bodies when they have some secret that must never be revealed. It symbolizes that the secret is buried deeply and no one will ever know about it. It serves as a self-made oath and reminder of it.

Who is the coffin tattoo for?

This tattoo decorates the skin of completely different people. No matter a man or woman, there is no age limit either. Usually, these are brave people with the independent opinion, who are unlike others around them.

Due to the mystical interpretation of the symbol, the coffin tattoo is often chosen by individuals engaged in the occultism and dark sciences. Those who want to touch the other world and believe in the afterlife.

It can be also creative and extraordinary people, who have their own views on modern society, ignore discipline and strict rules, with rebellious tendencies. Their original, fresh ideas help to move progress forward.

The coffin tattoo carries a serious, deep, mystical meaning. So, a person who decides to put it on their body is a strong personality with philosophical attitude towards life and versatile outlook.