Home / The meaning of a gold-fish tattoo

This article tells about the meaning of gold-fish tattoo, its symbolism and types of tattoos wit imagine of gold-fish. It will be useful for whom thinking about decoration the body with it bright painting. For making a decision about your tattoo easier we recommend you to visit next pages on our site: 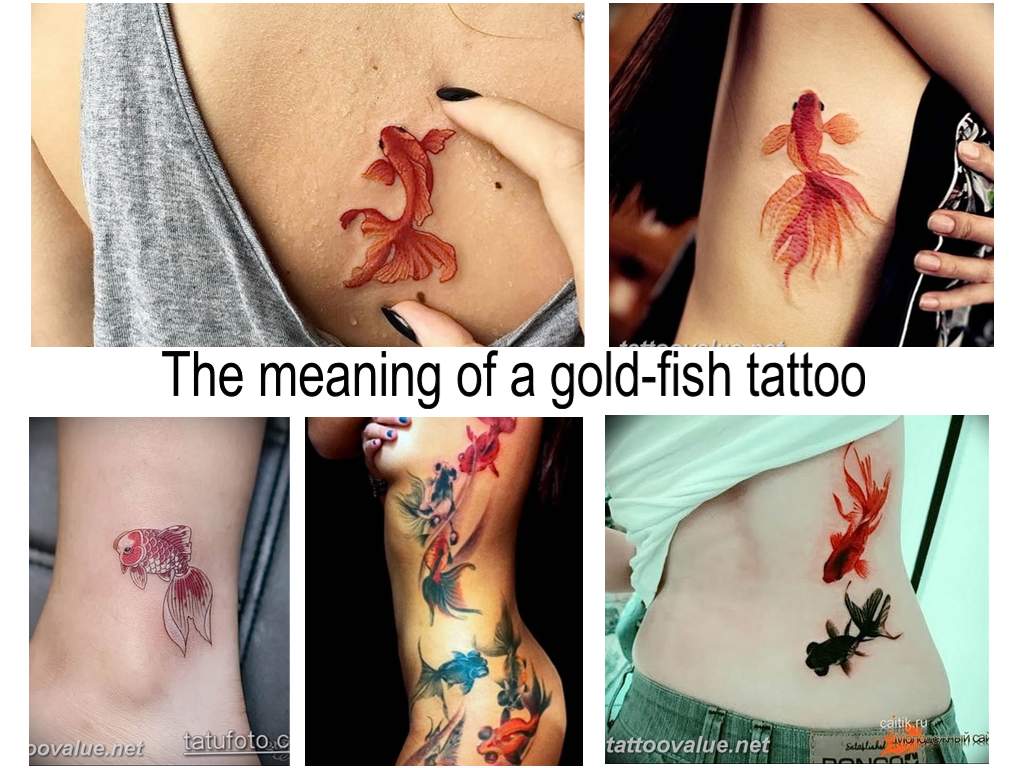 With the spreading of East culture also appeared image goldfish. From China came stories about the origin of these fish. In one story they called the divine gift of the deep waters, in other – waked tears of beautiful virgins. During the ruling of Syn dynasty, it was common to bring goldfish to Buddhist temples as a gift, what makes them part of this religion. In temples, ponds swam fishes. They were considered a symbol of Crystal purity, long life, luxury, prosperity, and at the same time protected from misery.

In Asia goldfish is associated with well-being circumstances, a pair of fish means successful union. They also symbolized a harmony of contradictions, due to its associations with the elements of water and fire. In Japan to all mentioned meanings added easily ruined magnificence. In most of worlds cultures goldfish with it, lush tails and large fins is a symbol of a harmonious combination of prettiness, grace, tenderness, and lightness.

Fishes are free and can swim wherever they wish, so they are considered as a symbol of the triumph over the earthly desires. The golden hue of the fish body means the results of spiritual improvement.

Photo examples of a tattoo with a goldfish:

Such kind of symbol looks pretty on girls, and it means not only an attraction to beauty but also works as a spirited defense.

Despite the versatility, a tattoo depicting a goldfish can be performed in different ways. It depends on its owner – whether she is a young girl or an adult lady. In the last case, the fins and a tail of a golden aquatic inhabitant can be exquisitely arched, completing by patterns, and so the tattoo gets another meaning – femininity, sensitivity, and softness.

The primary meaning of the goldfish tattoo is wealth, financial success and good luck. It would not be superfluous to mention that in Russia a goldfish has meaning luck and fulfillment of desires, because of famous Pushkin’s fairy tale about a magic fish.

Whichever pattern you choose, the magnificence of a goldfish will give you joyful emotions, besides this pattern carries only a positive value. A couple of fishes is an excellent idea for two people who love each other. For them, goldfish can serve as a symbol of a happy family life and harmony in relationships. Also, goldfish tattoo can be additionally decorated with a flowering lotus. The plot of such a picture means prosperity for many years.

With goldfish tattoo, life will bring you incredible gifts of fate, delight your soul and lead to ecstasy. It is not surprising that the tattoo with the image of a goldfish is so popular.

The text of the article prepared by: yaroshksenia (Yarosh Ksenia)

The meaning of the tattoo “Paper airplane” Demon – Tattoo Meaning