Home / The meaning of star tattoo on knees

Today we will take a deeper look at a star tattoo, the history and the meaning of the most part criminal star tattoo on knees. If you want to watch some imagine examples, please visit next pages on our site: 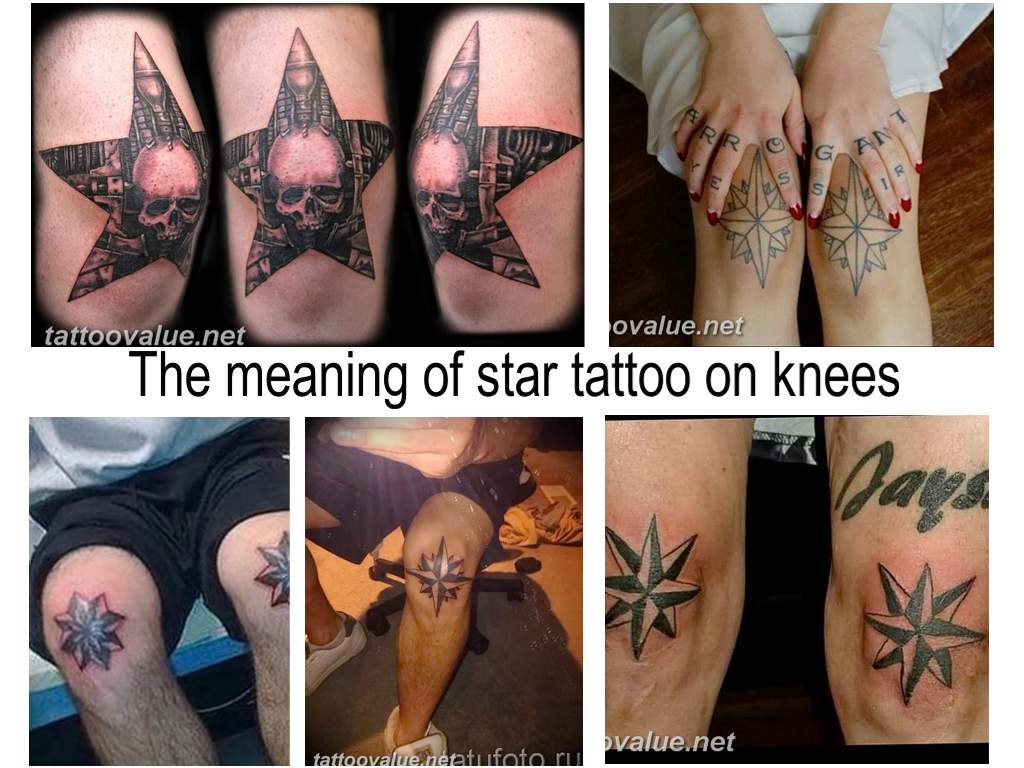 Meaning and history of a star tattoo on knees

Tattoos popularity is consistently rising. Today you can meet tattooed person in almost any age category, from young to old.

It can be said that a star symbol is the most popular and frequent design of tattoos. People get it on different parts of their bodies and in ordinary life these imagines have only decorative and art meaning, but in criminal circles also a star tattoo has more important aim and indicating a place of a person in a prisoners hierarchy.

Before taking a star to imagine as a tattoo, you should be very careful and conscious in choosing a sketch and a part of your body for it. Previously you should explore in details an information about the making of “prisoner’s” stars. Otherwise, in case of communication with law-enforcement authorities or, for example, medic personnel, inappropriate choice of the tattoo can bring you into troubles.

This type of symbols mainly chooses by thieves in the law, thieves authorities and those prisoners who believe they deserve such titles. Star, which is gotten on knees, may be different colors (red, black and blue) and the different variations:

In any case, each of these tattoos on knees indicates that the man belongs to elitethe  criminal group. No doubts that before taking such kind of imagine the person should deserves it. And if the prisoner transferred to another prison, he must take part in different challenges to prove this status.

Photo examples of tattoo designs with a star on his knee:

There are some star tattoo on knees that can be dangerous for ordinary people. In the criminal world, it calls “star of an arbitrariness” or “star of a negation.” Its owners are prisons negativists and tyrrans. This person must not to communicate with law-enforcement power organs to ask about amnesty or parole. In occasionally transgression prisoners laws the man disgraces the tattoo and must remove it.

The meaning of stars on knees

This criminal tattoo has a negative connotation. Its owner can be a rapist, robber or a felon. Such people do not want to do any kind of work in a prison. Moreover, they incite others prisoners for rebellion and indispose everybody towards wardens. Their watchword claims they will not obey anybody and bend the knee.

However, in a contemporary world, some people get this tattoos without any connection with the criminal world. In this case, this imagines means their disobeying to power, dissatisfaction with it and some contempt for all the government. It can be called a sort of protest expressed in this form.

However, even in the case of your protest and ardent desire get star tattoo on your knees, strongly recommended not to do it. Because if it accidentally was seen by people living “in prison concepts,” you will get the enormous problem, up to the loss of tattoos together with the skin. Moreover, the application of the symbol is an excruciating process, with a long period of healing due to permanent bending feet in the knee. And because of cracked skin in these locations, it is impossible to get perfect overlay paint, too.

With a strong desire, it is possible to make a star tattoo, for example, on the forearm or shoulder blade.

The text of the article prepared by: yaroshksenia (Yarosh Ksenia)