This material can help you to make clear the interpretation and meaning of the tattoo on the Internet topic, introduce you to the samples of the ready-made tattoos, describe their history and interpretation. For more information follow the links: 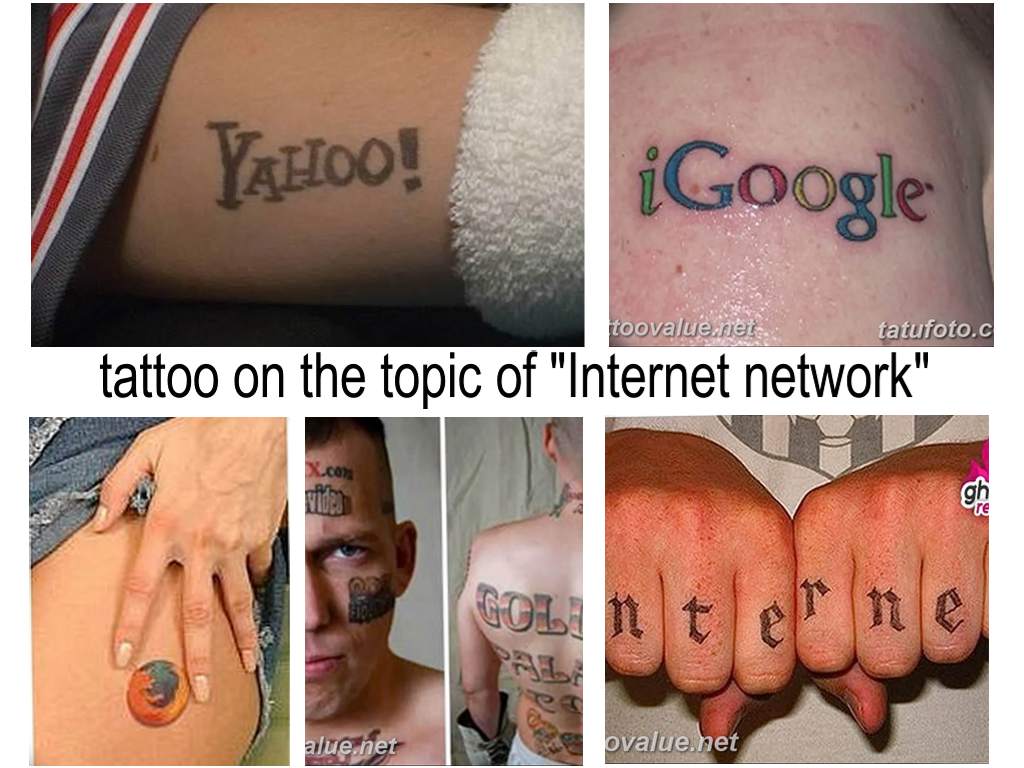 The meaning of the tattoo on the Internet network topic: Interesting facts

In the world where life exists beyond customary reality, even tattoos acquired virtual focus. Some young men and girls want to have tattoos with images of  Internet resources. As a rule, such tattoos holders are not more than 25 years old. One can frequently meet the logotypes of search systems, social networks and standard phrases taken from them.

Such kind of tattoos sprung into the popularity some years ago but it started with a usual on a dare argument or with a knees-up finally ended in the tattoo parlor. There are both colored and black and white logotype images. They are sometimes done only for fun or as advertising. The holder can earn good money especially if the tattoo is located in the conspicuous place.

Having the tattoo of search system logotype means identification of oneself with the virtual reality and blending into it. Another interpretation of such kind of tattoos is being in a distance from the real world and escape into the virtual reality looking for a better life. Those who have such images on their body can’t conceive of themselves without the Internet. They spend all their free time playing games and opening their whole life by sharing photos and videos. Such tattoos can be accompanied by additional images. They vary from beautiful flowers and whales to terrifying skulls. That way everyone chooses for himself. The only thing is that the right matching of image and inscription should be done. Thus if the word “Internet” would be written in the beautiful font but with skull coming along there would be no cohesion and harmony of the tattoo.

The signification of the tattoo with Internet image

When social networks such as Facebook have appeared, many people became so addicted to it that they started to do tattoos with citations taken from social networks. One can frequently meet tattoos with such inscriptions as “give me a like” or “follow me on Twitter”. It is possible to find out images with the names of popular social networks. Moreover, their holders do them on the truly unexpected places of the body.

Most commonly programmers and computer burglars make images of logotypes of popular sites on their body. But people of other professions can have the tattoo of thumbs up or the Twitter logotype. Wearing such a tattoo means an advanced level of its owner, unity with the Internet and partisanship to the virtual reality. Some young men express that way their outrage against the routine and customary life or even to the adults who don’t know a thing about the Internet and services for virtual communication. The owners of such a tattoo possess all possible kinds of gadgets, latest software and are well-versed in setting up sites or keep a blog for target auditory of their age.

It’s better to do the tattoo just like the original image. Otherwise, it would be cheap-looking and unseemly. That’s why one should find a good tattoo artist who is capable to make a precise copy of the chosen image. If the logotype is colored, the tattoo should be also in color. If the tattoo is an inscription from the social network, its language should be the same as of the original one.

Such a tattoo should be made bright-colored because the very image is undistinguished and it would be hard to amaze somebody by it. It’s popular amongst the young people to make a neon light outline of the image. Before getting a tattoo it’s better to look through all the templates and choose one acceptable for you.

The meaning of the tattoo “Paper airplane” Demon – Tattoo Meaning