Home / The meaning of an 8 number tattoo

Here you can find some interesting information about the meaning of an 8 number tattoo, its sense and history as a tattoo image. Those who are searching for a suitable image before going to a tattoo salon we suggest looking through these sources: 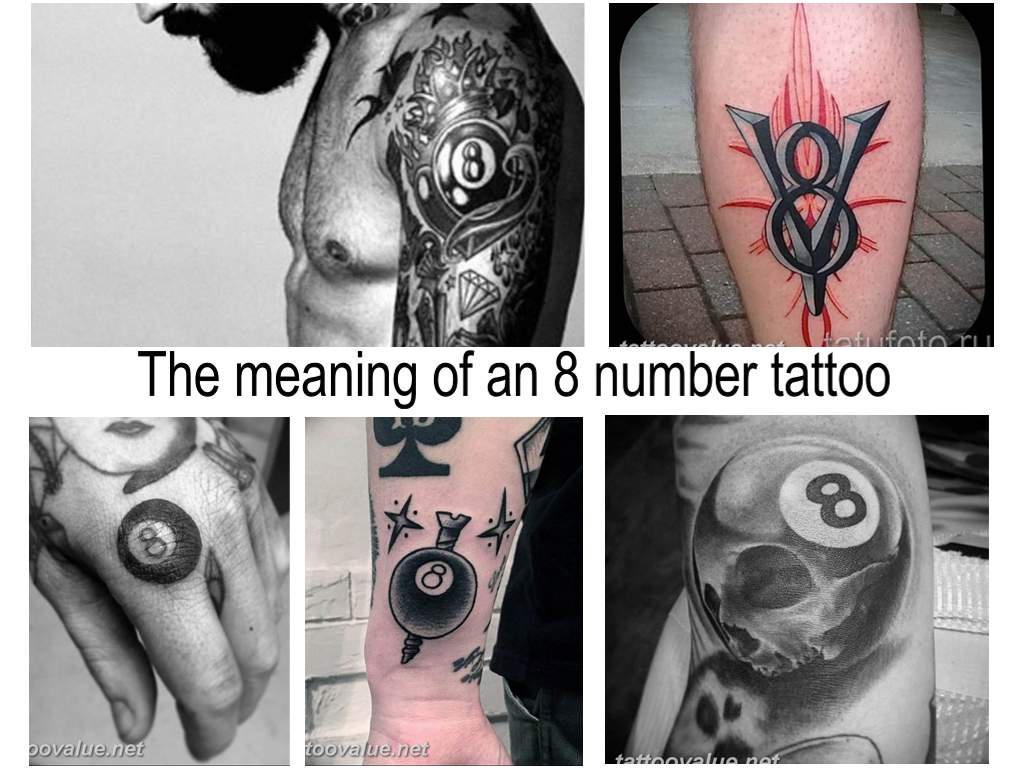 The meaning of number 8

Since ancient times a tattoo hasn’t been supposed just a cute picture on human’s body. Tattoos have always had some sense. The following main motives of tattooing can be distinguished:

As body painting is a symbolic art, different tattoo images have their own meanings determined by the context in which an image is used.

What does an 8 number tattoo mean? In a magical context number 8 can be used as the numerological conformity of Mercury. So if applied on an occultist’s body this number may have specific sense of this planet to him, for example, Mercury may be the patron planet of his horoscope sign. In Western Europe magic based on Middle Eastern mystical doctrine, particularly Kabbalah, the ancient Hebrew alphabet, each letter of which is strongly associated with a definite number, is widely used. So adding the number meanings of all the letters in a word, the one of the whole word will come out.

Photo examples of the tattoo with a figure of eight figures:

An 8 on its side forms the widely known infinity symbol which has been a magical one since ancient times. Such a symbol personifies Uroboroses – the bent in 8 shape serpent biting its tail.

Applied as a tattoo the infinity symbol can be used either in the mystical or in the everyday context. Particularly it may mean the endlessness of some positive quality or a feeling. Lovers do the tattoos of this symbol as a sign of their never ending and sincere feeling.

The infinity symbol may also express a boundless desire of getting new knowledge, purposefulness and a limitless human power.

This sign is versatile, so it suits each person regardless of one’s sex, political stance and religious belief.

Other meanings of an 8 number tattoo

Number 8 can be tattooed to commemorate some event happened on the corresponding date.

In a military tattoo number 8 can be connected with the one of the subdivision, which the tattoo owner once served in.

In street bangers’ tattoos number 8 often means the street or the avenue number.

In prison tattoos numbers usually correspond to the term of imprisonment.

So you can see that a number of possible meanings of an 8 number tattoo is just as great as the infinity itself.

The text of the article was prepared: elenashatalina (Елена)

The meaning of a witch tattoo The mirror tattoo meaning