Home / The meaning of the tattoo “mountain”

This article will help you learn everything about the meaning of the mountain tattoo, and also unveil the history and types of patterns of this tattoo. Our site offers you to look through the following sections of the catalog before contacting the tattoo salon: 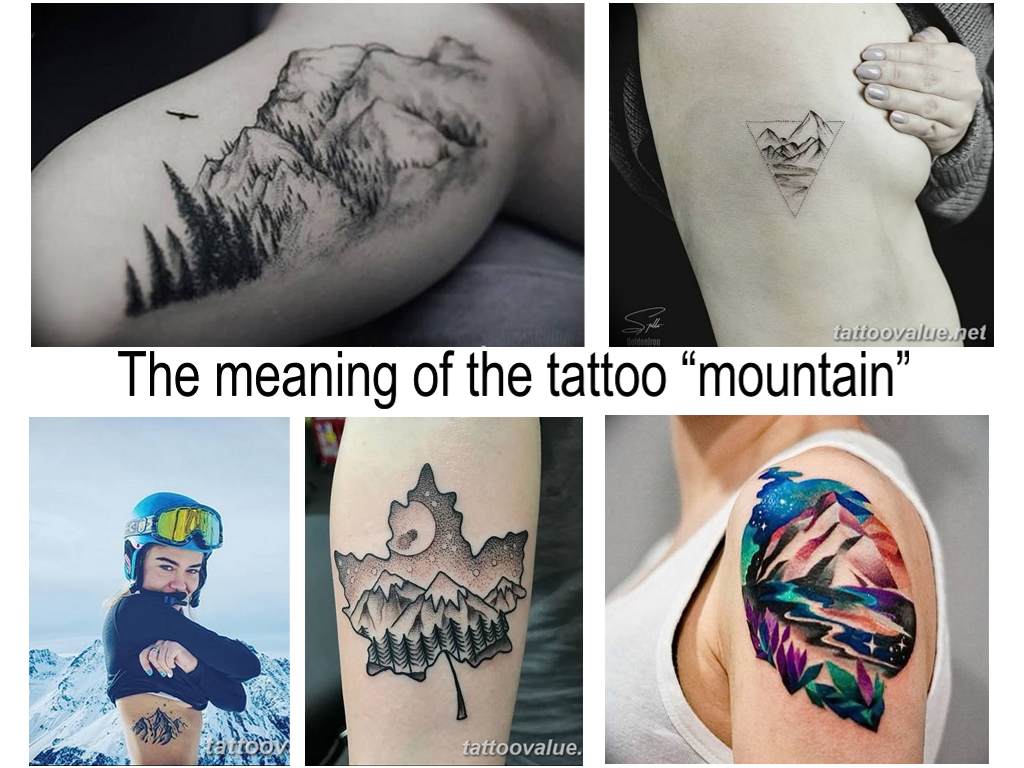 The history, meaning and purpose of the mountain tattoo

Mountains always attracted people with their inaccessibility, beauty and greatness. The image of the mountains is often found on the canvases of the great masters. And it is quite natural that this symbol has found its place in the art of drawing pictures on the body.

In ancient times, mountains were considered the kingdom of gods, the home of creatures with unearthly power. Perhaps, therefore, such tattoos may be considered magical.

The meaning of the mountain tattoo depends on the plot of the drawing, its color and the type of the top. The choice of image is based on the personal sympathies of the person, emphasizes their individuality.

A series of mountains is a barrier between two worlds, it is indestructible and eternal. Sunlit mountain covered with flowers is a symbol of a stable and secure life. An example of this is the kingdom of the gods – Mount Olympus.

It is hardly worth decorating your body with dark, gloomy mountains with peaks covered with clouds. Such image will bring you no joy and confidence, people around you won’t be happy with it either.

The Eye of Horus tattoo is a symbol of the god Ra from the mythology of ancient Egypt. This tattoo is more common.

The meaning of this tattoo is always a protection against evil creatures; it gives the wearer of this amulet attentiveness and sharp eyes. The meaning of the Eye of Horus tattoo corresponds to the ancient Egyptian symbolism. The choice of the place of drawing is only up to you.

Famous mountain peaks are also often chosen as a pattern for a tattoo. In this case, the mountain tattoo can be a symbol of patriotism. The Austrian will be happy about the image of the Alps, the Tibetan – the Himalayas.

Landscape images are quite rare due to the fact that they require persistence of the client and stamina of the tattoo master. That’s why simpler tattoos are more popular. Such type of a tattoo can be made either in black and white or in color.

The tops of the mountains are still considered a symbol of strength, power and authority.

Designs and placement of the mountain tattoos

The temperament and taste of the future owner of the tattoo affects the plot and symbolism of the picture. Pictures of mountains can be done in different styles and different sizes. You can look through the sketches and photos of the finished tattoos. Our site provides many options for inspiration.

The mountain tattoo will look great on big exposed parts of the body, for example, on the stomach or the back, as well as on narrow body parts such as neck, arms, legs.

A tattoo can be made on both sides. One side is rough and voluminous, and the other is smooth and flat. This may expose its owner as a multifaceted person who can be cheerful and lively, but at the same time he is not alien to melancholy and calm.

Tattoos of mountains with trees on them is frequent in the so-called “tattoo sleeves” popular among men.

In general, this tattoo does not convey negativity. It can also mean a passion for travel. You can even apply it because you just like the way it looks.

If you decided to get a tattoo, go to a reputable tattoo parlor. Then drawing on your body will bring only positive emotions.