Here you can figure out the brief meaning of the star sign tattoo, read about each image and symbol, their peculiarities, interpretation and sense. In this site you can find the descriptions of each star sign in details and look through the additional images: 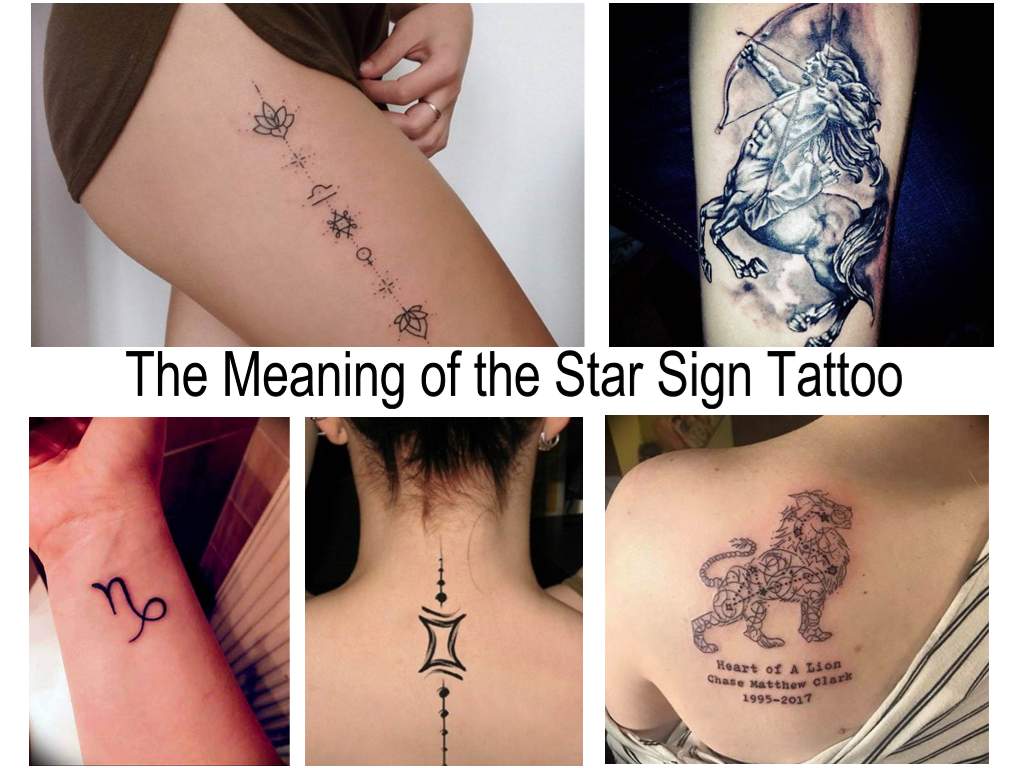 Getting a tattoo is a nice way to stand out in a crowd. It emphasizes its owner’s individuality and serves as the embodiment of his ideas. An image on a human body can have some cult sense, serving as a guard for its owner. The decision whether to apply a tattoo or not is really responsible, that is why it should be thought of carefully and the safety of your health should be guaranteed.

The tattoo sketches are various: animals, birds, insects, fish and flowers. Each of them has its special meaning. Giving some mythical sense to the tattoo is commonly up to romantic natures. Among such tattoos are fantastic creatures, runes, star signs.

Every person is aware of the star sign he belongs to, but far not everyone chooses to apply its image on the body. Only those who want their star signs to be the charm symbols and to save them from any troubles get such tattoos. There are 12 star signs, presenting a circle of animals, along which celestial objects pass.

Aries is the very first star sign. It belongs to the element of fire and is under the influence of the planet Mars. The tattoo of Aries looks as the letter “V” with the edges folded, the constellation Arias or a ram’s head. It symbolizes open-mindedness, honesty and frankness. It is a generous, warm and hard-working sign, which only needs being more tactful and patient. The tattoo strengthens positive attributes of the sign. The tattoo of Aries is applied on chest, back, forearm.

Taurus is the sign of the element of earth which is controlled by Venus. The tattoo of Taurus looks as the bull silhouette. The main features such the tattoo emphasize are self-control, harmony and calm. Representatives of this sign are hard to get mad, they are never a bit bothered, they have only two states: calm or fury. The tattoo of Taurus empowers its owner with life force and is commonly applied on chest, scapulas, back, hip and forearm.

Gemini is under the influence of the element of air and the planet Mercury. The tattoo of this sign symbolizes communicability, intellectuality, mutability and duality of nature. Representatives of Gemini sign can carry out lots of things at the same time; stand against routine, as they need a variability of emotions. This tattoo is often painted as the image of the roman figure of two, a couple of boys or girls, people’s silhouettes and even portraits.

Cancers is a sign of the element of water. Its celestial patron is Moon. Cancers are of sensual nature. The tattoo of Cancer symbolizes its owner’s emotionality and warmth. It can tell about cancers’ emotional needs which are usually hidden from other people. The tattoo of Cancer often looks as the merge of feminine and masculine, pincers or the image of crab. The images of moon, stars, waterlily, an infinity symbol can be added into such tattoo. The most suitable body parts ofr applying it are neck, chest, right arm.

The tattoo of Leo, as the sign of element of fire, connects its owner with solar energy. The image of a lion on the body speaks of leadership qualities, the ability and desire to lead, greatness, generosity of its owner. Such a tattoo can look quite aggressive. Most often, such a tattoo is applied on back, chest and forearm. A sketch of the tattoo can be depicted as a symbol of the zodiac sign, a picture of a real lion, the constellation of Leo. Often the image of a lion is combined with the symbols of the sun, crown, scepter.

Virgo is the earthly sign of the zodiac, which is protected by Mercury. The tattoo of Virgo is a symbol of purity. Often depicted as the Virgin Mary, the silhouette of a woman holding something in her hands or the letter “m” with a curl at the end. The tattoo symbolizes intelligence, conservatism, restraint and responsibility of representatives of this sign. This tattoo is applied on back, side, chest, thigh, shoulder, arm.

Libra is under the authority of the air element and the planet Venus. The tattoo of Libra symbolizes the balance and harmony of the soul, the pursuit of truth, purposefulness, a creative approach to life, ease. The tattoo can look like scales in balance, or vice versa in imbalance. They can also depict the goddess of justice Themis with scales. Most often, such tattoos are applied on the lower back, hip, shoulder, arm.

Scorpio – a water sign, which is under the auspices of Pluto. The tattoo of Scorpio is suitable for strong-willed, businessmen and determined people. It serves as a protective talisman protecting the world of the living from the world of the dead, awakens the energy of a person and brings good luck. Scorpion tattoo is applied on abdomen, chest, shoulder blades.

Sagittarius is subject to the fire element and the planet Jupiter. The tattoo of Sagittarius is suitable for strong, determined, open – minded and sociable people. Such people love to travel and learn something new, the obstacles in their way are just a reason to move on. The tattoo enhances the good features of the sign, brings good luck and helps to cope with mistakes. The tattoo of Sagittarius often looks like a centaur with a bow in his hands. In order for a tattoo to bring more energy, it is pricked on thigh, buttocks and tailbone.

Capricorn is a sign of the earth under the auspices of Saturn. Applying a Capricorn tattoo will help its owner to always stand firmly on his feet, give peace of mind and good luck in love. Tattoo Capricorn symbolizes perseverance, the desire for success, sensitive intuition in money matters. The most suitable body parts to apply such a tattoo are legs, as they touch the ground. You can portray Capricorn on your hip, ankle, or even your foot. It is believed that such a tattoo will protect the health of the lower limbs of its owner from fatigue and disease.

Aquarius is under the influence of the element of air and the planet Uranus. The Aquarius symbolizes the sign of flowing water. He is often portrayed as a muscular man pouring water from a jug. The tattoo of this zodiac sign speaks of the strength, perseverance and creative abilities of the owner. It brings well-being and stability. Such tattoos are commonly applied on thighs.

Pisces is the last sign of the zodiac. They are under the auspices of Neptune and belong to the water element. The tattoo of this star sign is depicted as two fish deployed in different directions. Such a tattoo symbolizes the duality of human nature and at the same time stability, the unity of earthly and cosmic principles, well-being and good luck. The tattoo of Pisces is applied to places of concentration of  Pisces strength: hands (wrist, shoulder, hand) or legs (shin, ankles).