Wolf is one of the most common tattoo images. Since ancient times, wolves have lived near human beings and even hunted the same animals as humans have. People always feel not only fear, but also respect and admiration when seeing this majestic animal. Having observed wolf’s character, people learned from it how to be crafty and brave, to have courage and solidarity. 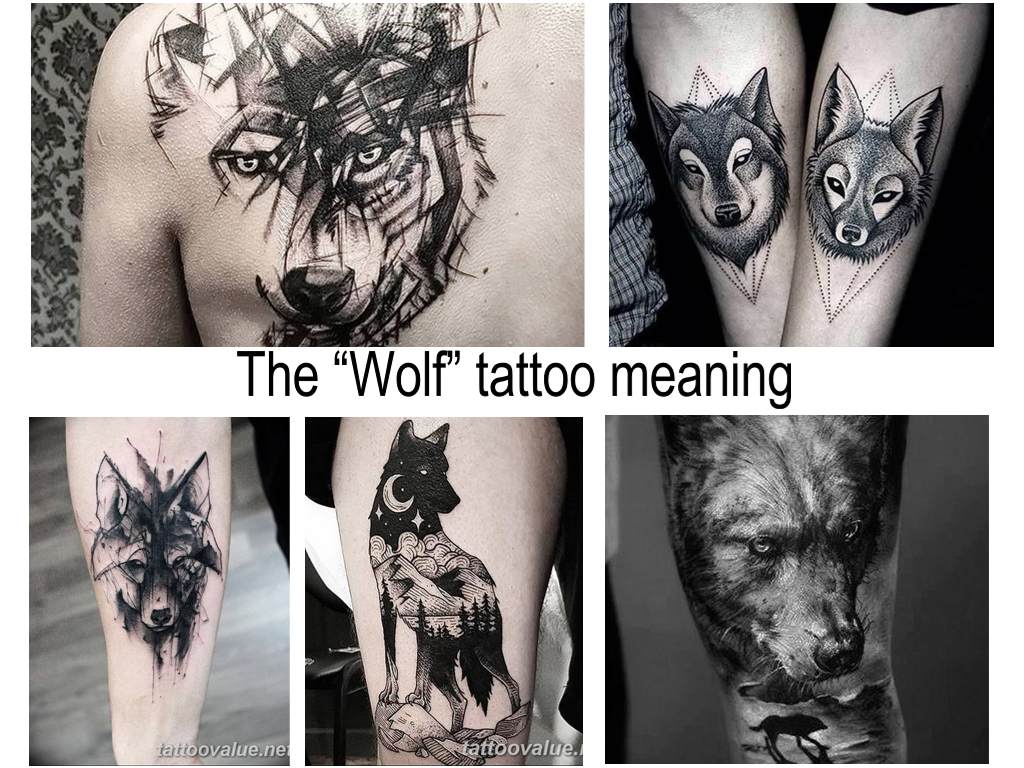 The “Wolf” tattoo meaning – The most interesting

Different people had different attitudes to wolves. Some were afraid of them and some worshipped. But you could not be indifferent to these animals. In all the cultures wolf is respected for its intelligence, strength, swiftness, independence and loyalty.

Tattoos with wolf depicted can have many meanings. But one thing is undeniable – the “wolf” tattoo does not suit to insecure and flabby person. Wolf is a symbol of independence, strength, loyalty and nobility, so if a person has these character qualities, then such tattoo might become his/her talisman.

Symbols of wolf had always been considered as sacred ones for many peoples. The wolf is a predator that fights for survival. The Indians accepted wolves as mentors which taught them to hunt, to read the tracks. Only a leader, a best hunter or a shaman of a tribe could have a tattoo with an image of a wolf. The ancient Egyptians, Romans, Greeks, and Slavs treated wolves with respect, considering these animals as smart, brave, clever and strong ones. At that time, these qualities were very important to people. In the Christian culture, wolf became a symbol of the devil, because the Bible called the people the flock (like the sheep), and the wolf was its main enemy.

But the  cultures have  altered over time, and so have  their attitudes to wolf. Nowadays, attitudes to this animal are very contradictory. The same contradictory thoughts are shown to wolf tattoos. On the one hand – it is a faithful monogamous, a reliable friend and a strong leader, who cares about its family. On the other hand it is a wild predator, ruthless, cruel, cunning loner who lives by its own rules. The combination of these (sometimes contradictory) character qualities made wolves the one of the most popular tattoo images.

See photo examples of drawing a tattoo with a wolf:

The meanings of the “wolf” tattoos.

There is such a huge variety of tattoos with the image of a wolf that to list them all is impossible. But such tattoos can be divided into several certain groups:

*А leaping wolf. It symbolizes inner strength and tenacity, an overcoming of various hindrances (both external and internal).

*A howling at the moon wolf is a symbol of self-sufficiency, independence, proud loneliness, inner strength or dark magic power.

*A wolf in fire can be a symbol of a demon, an embodiment of dark forces.

*A wolf showing its fangs symbolizes rage, cruelty, aggression and courage in every life situations.

*A white wolf tattooed means extraordinary personality: a lone warrior who is ready to overcome obstacles on his way to an aim.

*A female wolf is a symbol of justice, faithfulness not only to a family and friends. If a female wolf is depicted with wolf – cubs, it means attention, support and care.

*A werewolf has the meaning, that a man/woman having it wants to recognize and to subordinate their dark side. It’s a magical symbol.

*A wolf with a flock symbolizes a devoted defender who is ready to fight for the family, friends even with his/her life.

A wolf is an animal with its own view of nobility, an embodiment of the beast that can be found in every person. There is his family and and there are others, there is a strong division between white and black. There’s no middle line. A wolf is not interested in the society values, he does not look for destruction, if nobody interferes him, he will not start the battle.

The text of the article was prepared: ellieinred (Polina Morozova)

The Meaning of the Volos Tattoo Demon – Tattoo Meaning