Home / The meaning of a leopard tattoo

On this page we will have a talk about the meaning of tattoo leopard, its history, different interpretations as well as variable designs of this quite popular tattoo. Those who would like to know more about this fascinating tattoo should pay their attention to our sections with: 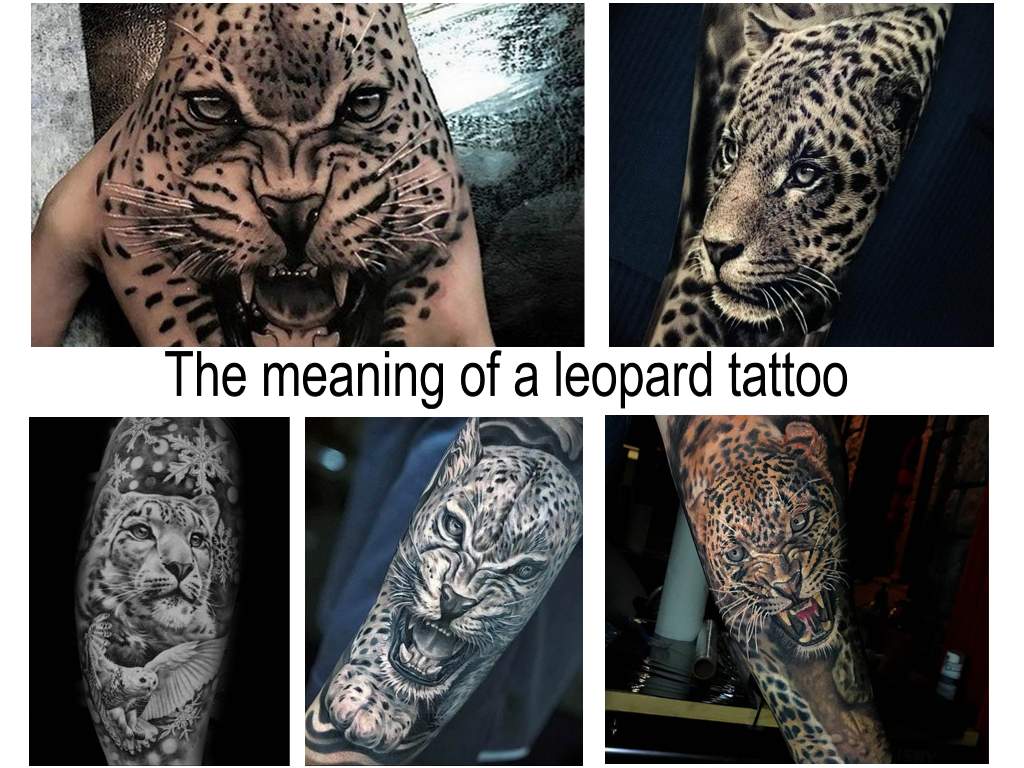 Snow leopard, which is also known as Irbis or Barfani Chita is a rare, endangered animal that lives on the steep, windswept slopes of the Altai and the Himalayas. Let’s have a closer look at this interesting tattoo and try to figure out its meaning and cultural beliefs connected with this amazing creature.

This beautiful, graceful and invisible among the snows cat is actually a pretty frightening solitary predator, which attacks wild goats and rams daring to rise to the height of its usual habitat. It is the only sizable hunter at such high altitudes.

Snow leopards look like their close relatives – leopards, panthers and tigers – though they are much smaller in size, squatter, but much fluffier. The color of its coat is a shade of gray and covered with beautiful black spots. Nevertheless, its lower coat has snow-like white and bright shades that make a perfect camouflage for this mountain hunter. This misty disguise helps snow leopard hide among the rocks, caves and mountain gorges.

Snow leopard’s signature feature is the lack of the ability to roar. Still and all,  Irbis can purr like a cat. Snow leopards are an enchanting mixture of all kinds of cats, even though a very unique mixture.

Snow leopard tattoos are designed for independent people who do not care much about thoughts of others, are proud of their identity and do not make much friends thanks to their special and cat-like personalities. This is a kind of person who prefers to play a lone hand and has a strong sense of self-worth. His actions can be sometimes unexpected and surprising as they are caused by his or her inner motivations.

Photo examples of a tattoo with a leopard pattern (559 photos):

All these unique features attract attention of others and make such people to stand out from the crowd. This is why a snow leopard seems a perfect match for this kind of people. Such a totem is a cultivated way to emphasize their identities, accents on their personalities and adds to their confidence facing the world. Owners of leopards’ tattoos are real masters of their own lives and their own destiny.

The mountaineers consider snow leopards as real kings of the mountains. Those persons who come to a decision to wear a snow leopard tattoo seem to think the very same way about themselves – as of the masters of their own fates and architects of their fortunes.

Though tattoos with snow leopards are not as popular as tattoos with other cats such as tigers or lions, none the less, they are very attractive for certain individuals. There is numbers of different reasons that cause people to prefer this particular kind of tattoo. Some persons, for instance, are very sensible to the extinct animals and by way of wearing the snow leopard tattoo they show their feelings towards the endangered species. Other people associate the snow leopard with their hobbies such as alpinists who have conquered a large number of mountains and consider themselves as adroit and strong as Irbises.

There are lots of different designs of the snow leopard tattoos which suit faultlessly both men and women. A variety of versions can be applied to diverse parts of your body and will emphasize   your personality. If you prefer, they may be applied to the places that are hidden from squinting eyes of others.

The meaning of the tattoo Scales The umbrella tattoo meaning