We offer you to learn more about the squirrel tattoo meaning, its sense and the history of this interesting tattoo design. We offer to develop an idea of a picture and to see some versions which we have arranged for you within our tattoo catalogue if you are going to make such a tattoo and are ready to go to a tattoo parlor: 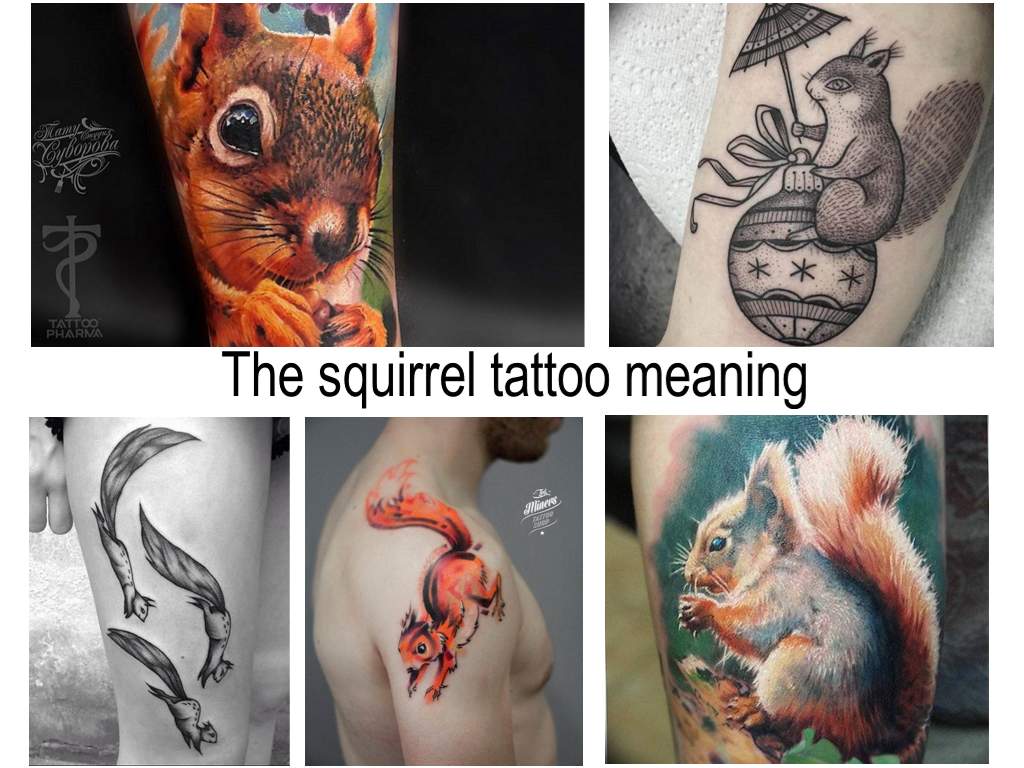 The squirrel tattoo meaning, its sense and the history of the picture.

Women and girls like a red active squirrel very much. That’s why the meaning of the squirrel tattoo is a huge intellect, a good reaction, quick decisions, creativity, high work capacity, an ability to find a way out of a deadlocked situation. This animal is also associated with greed, vision, cleverness, selfishness and adaptability. The fast animal is never tired, it is cunning and clever. The squirrel tattoos look fresh and nice; they give optimism and joy to their owners. These furry little creatures symbolize positive things in the tattoo world; they work hard and live peacefully with other forest inhabitants. The tattoo masters often combine a squirrel image and flowers, nuts, inscriptions, oak leaves and gems.

Different meanings of the squirrel tattoo.

Photo examples of drawing a tattoo with a squirrel:

How to choose the right sketch of the squirrel tattoo.

You should take into account your temperament and character traits before choosing a sketch of the squirrel tattoo. The quiet people should choose an animal that quietly eats nuts or sit on a branch, for example. The active and ambitious people choose a tattoo design with a flying, jumping squirrel. It will be the reflection of character, give energy and endurance to a tattoo owner. The interpretations of this image are different.

It is absolutely inappropriate for very serious people to make this childish drawing on a body. Others, on the other hand, believe that this choice of a squirrel is the most optimal one because it gives a glimmer of light and love for life to grey day-to-day routine. But the primary meaning is that a squirrel is in a good mood and in a most positive spirit. The furry animal is a symbol of agility, diligence, fertility, family hearth. The owners of these tattoos are people who appreciate the comforts of home. Their houses have a pleasant, peaceful atmosphere and the family members have everything they need. Such people have built a big life for themselves and could rely on their persistence and diligence. Somebody doesn’t like a squirrel’s egoism because an animal most values solving its own problems. However, we can forgive a nice squirrel for all these things and try not to focus on them.

The text of the article was prepared: olgag-etxt

The meaning of a gold-fish tattoo The mirror tattoo meaning