Here we gave some information about white bear tattoo meaning. We offered pictures of gripping tattoo designs, described their variations, meaning, definition and story. You can see more examples here. 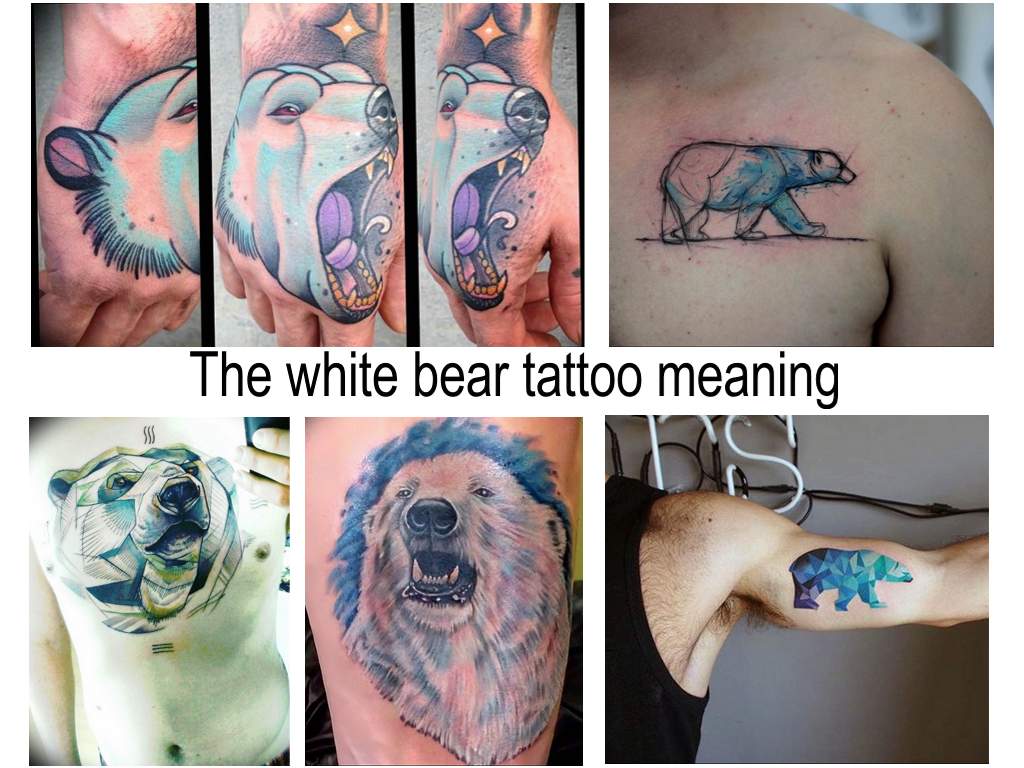 This article reveals true meaning of a tattoo of a white bear, possible variations of picturing this predator and places and cases where it might be pictured and what it would mean.

The image of a bear itself is wide-spread among different ethne. People bowed before the might and power of this beast. It’s not a secret that a bear doesn’t have natural enemies in the world of animals. A bear portrays different qualities for every ethnos, but, generally, they have something in common. It’s no wonder that Nordic ethne who live behind the Polar Circle, praise this predator through folk tales.

There are multiple of this art variations with fundamental differences: realistic and cartoon one. A bear can be pictured all alone, it can be a bear sow with her cub or just a cub.

The beast can take various poses, stand in full length or be pictured with just an upper part of his body.

A bear can be in any emotional state: men are keen on furious beasts, baring their teeth and standing on hind feet, but women tend to see bear as a peaceful creature. Arts of bear sows and their cubs are often preferred by them as well.

A composition can contain only a bear, but details are not so rare among tattoo artists and their customers. The most wide-spread would definitely be a bear on an ice plate, meaning the holder of this art can feel quite lonely, but still feels strength to endure the freezing weather to finally reach the shore.

The meaning of a White Bear Tattoo.

As already stated, white bear is a symbol of Nordic ethne and is often used to portray the pride of a Northener, who wants to wear his roots on his body to show it off any time there is a chance.

Lonely assertive people who always stand by themselves prefer vivid realistic images of a predator in white. Choosing this animal, they state their willingness to live by their own rules, defeating all the obstacles in front of them, to the whole world. The said person stays independent come what may. The emotional state of a chosen bear shows the way they treat the society restrictions: a full-sized bear with his bared fangs means pure fury, while a calm variant can be seen as a conformist behavior.

A bear can be pictured as a cartoon character – Winnie The Pooh, for example. But this, however, would state your reluctance to leave childhood behind, as you’d like to keep all of your pleasant memories. These arts are always used by sentimental girls, but never disappoint.

A white cub can be deciphered as a symbol of being helpless and needy – a variation often used by girls who unconsciously see themselves in the said cub. Women who already have children are more interested in a picture of cubs with their bear sows: there is a swift parallel between art and a mother who cares for her kid and cherishes them a lot.

Body areas for this art.

Men are common users of this art. Any part of their body can be used to make this tattoo, it all depends on a scale of preliminary image and idea: whether an animal is pictured full-size or only with its head. The most popular place for this art would certainly be back, shoulder blades, ribs or upper chest.

The text of the article was prepared by: steviegust (Anastasia Gastin)

The meaning of the tattoo “Hibiscus” The umbrella tattoo meaning