In the article we are going to tell about the signification of the tattoo of the Vikings, the meaning of the images of the tattoo and its history. For those who are looking for the variant of their tattoo we propose to look through our catalogue and choose the base for your own unique tattoo: 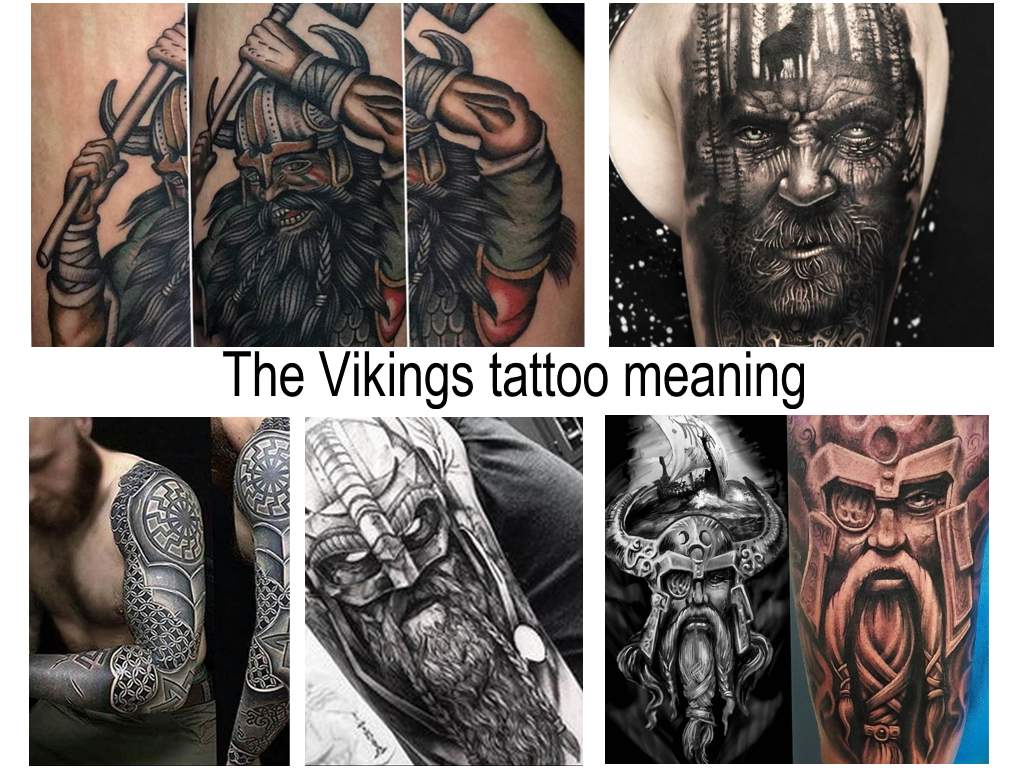 Interesting information on the tattoo of the Vikings

Being severe mariners and warriors originated from Scandinavia the Vikings stroke an awe to the Christian European states at the period of the early Middle Ages. The Vikings possessed the mythology rich of legends and sagas with variety of gods and creatures: the most famous were Odin, Thor and Freyja amongst the gods-Asiers. Different creatures and spirits such as valkyries, snakes and ravens were also popular.

Moreover the Vikings were famous for their dragon ships which were distinguished by superior marine qualities according to those times. However, the Scandinavians were eager for not only war but they were also skilled merchants.

In the annals of different European peoples one can find the proves to the fact that the Vikings decorated their bodies and even faces with tattoos though there aren’t any archaeological data evidencing to that.

Tattoos of the Vikings: variations and meaning

At the present time the worshipers of the Scandinavian mythology and history mostly use the following images for their tattoos:

-Dragon ships. Elegant and swift-sailing rowboats are to be the symbols of conquering of the seas by the courageous Scandinavian mariners for more than hundred years. Carved head of dragon or snake fixed on the bow of the ship boded ill for those on whose banks they were sailing up to.

Photo examples of tattoo designs on the theme of the Vikings:

-Magic symbols, figures, runes. Ancient peoples of Scandinavia were distinguished by a variety of stones left with engravings of runic conjurations and magic symbols, for example, the Valknut (the triangle of Thor) or Aegishjalmur (the Helm of Awe). Such symbols were engraved on the weapons or armors, domestic implements or imprinted on their bodies before the fight. Their basic assignments were to protect from the evil magic and be the guard at the fight. And the hammer of the god Thor – Mjollnir – it is frequently used as a tattoo or worn as an amulet. Specially mixed runes, so-called Galdrastafir, are also used very often.

-The gods and mythological creatures. The gods of the Norse Pantheon possess conspicuous appearance: powerful one-eyed Odin armed with magic spear Gungnir and galloping on the eight-legged horse Sleipnir; red-headed Thor hammering the giants-jtnar or the Goddess of Love Freyja possessing magic hawkish plumage. One can often meet the valkyries carrying away the fallen warriors into Valhalla. Companions of Odin, ravens Huginn and Muninn, wolf Fenrir and world snake Jrmungandr should be noticed among the mythological creatures.

-The images of the very Vikings. The tattoos with images of severe northern warriors armed with swords and hammers are looked effective. One could follow the historic appearance of the Vikings based on the annuals and sagas or allow fancy to play round and draw the warriors wearing a classical horned helmet and with huge double hand pole-ax.

The tattoos with images on the Scandinavian theme mean power ( both physical one and spiritual) of their owner or show affinity of mindsets of the ancient warriors with the owner of such tattoo.

The meaning of the Anubis tattoo Demon – Tattoo Meaning