Home / The Meaning of Biomechanics Tattoo

This essay will allow you to find out the meaning of the tattoos of biomechanics, introduce you the features of the style, show you the examples of drawings of finished tattoos and describe their meaning and history. Additional materials: 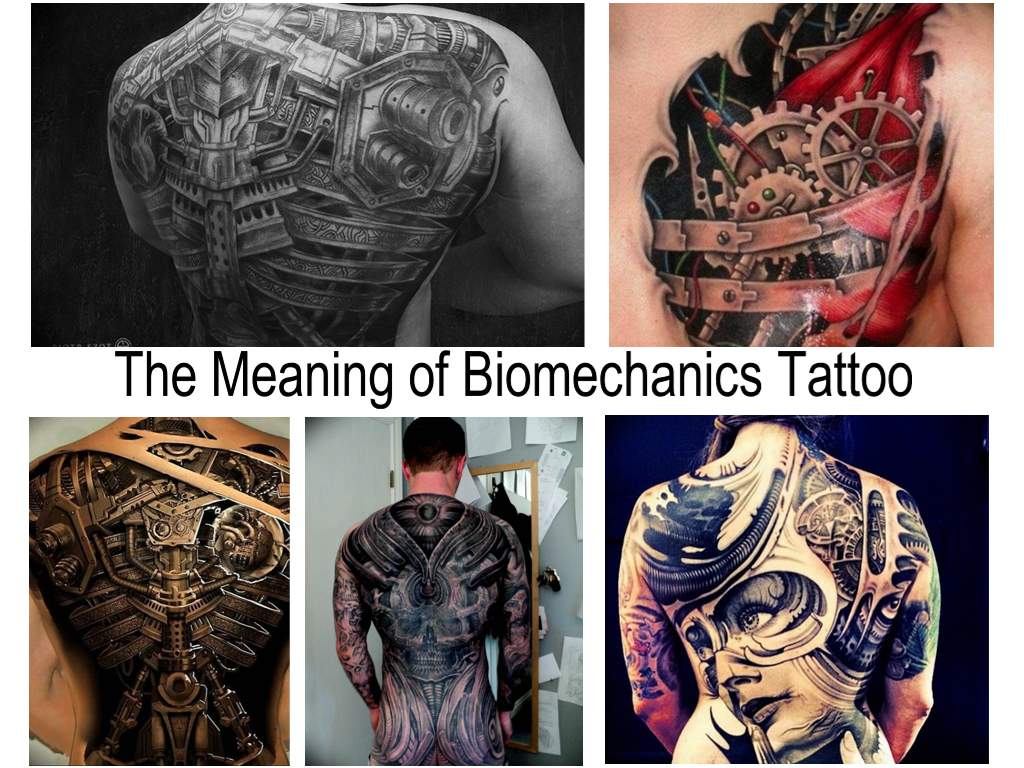 The Meaning of Biomechanics Tattoo – The most interesting

For many years, tattoos are very popular among all ages. Not an exception among them is one of the spectacular and beautiful styles – biomechanics. The main image of such tattoos is to stylize a person, namely its parts, under all sorts of mechanisms. The tattoo imitates the gap of the skin which is an outward manifestation of the mechanical components of the person. Human biomechanics is always spectacular, and sometimes performed so well that it seems realistic one hundred percent.

The style of biomechanics appeared in the 80s of the last century, when the movies “The Terminator” and “Blade Runner” were very popular. Most of the ideas were taken from science-fiction films. There is an opinion that the work of tattoo artists was influenced by the artist Hans Rudolf Giger, who was engaged in drawing fantastic creatures. Over time, new films and images of cars appear, and the style borrows more and more for its development.

Features of tattoo biomechanics and its meaning

As a rule, tattoos in the style of biomechanics do not have any meaning and do not carry a semantic load. They are a simple depiction of a surprisingly new inner world of man. But despite this, these tattoos are very difficult in their execution because of the impressive amount of work, thanks to which an experienced and talented master needs to achieve three-dimensionality as accurately as possible.

But if you move a little away from the idea that biomechanics is just a drawing, and pay attention to the image of certain objects, you can find a little sense in this.

Since such tattoos reveal the skin, show the inner contents, as tendons and muscles are held on bolts, and the heart has gears and nuts, they subconsciously lead us to think that it’s all unnatural, alien and frightening. Some tattoos can cause rejection.

A certain philosophy can be seen in the tattoo of biomechanics in the style of a musical instrument, such a tattoo as it strives to set it up and play on it. Looking at such a tattoo, you realize that in front of you is a creative person who is very vulnerable. This person, as well as the tool, needs care. And after care such a person can show what he knows and what you are capable of.

Popular variants for the tattoos of biomechanics:

Photo examples of tattoo designs in the style of biomechanics (650 photos):

Places of application for the tattoos of biomechanics:

It is worth paying attention to the person who has a tattoo with the image of some explosive device. This is an indication of the latent aggression or immense power that lies in the owner of this tattoo. The bomb, encased in human flesh, symbolize a sign of the imminent and inevitable death of its owner. Each person has his own timer, but only the higher forces know when it will stop.

Biomechanics is often located in places such as the forearm, shoulders, legs, heart and back.

Most people who choose tattoos in this style are unusual and creative individuals with a broad and stormy imagination. As a rule, such people are dreamers and fantasists.

The text of the article is prepared: ALINAHALAYA (Chalaya Alina Aleksandrovna)