In the material we will talk about the meaning of the tattoo “wind”, the significance, variations and history of this pattern in the art of tattooing. For those who are at the stage of forming the tattoo idea, we offer the following sections of the catalog as an addition: 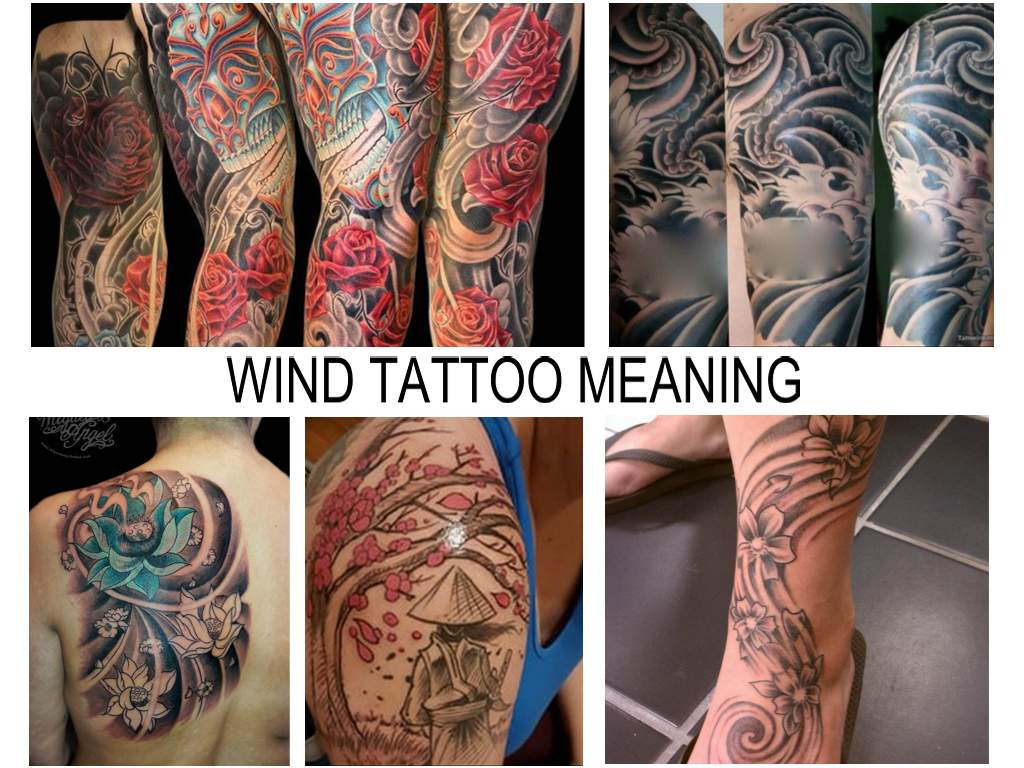 Interesting facts about the meaning of the wind tattoo

Is it possible to portray the wind? At first glance it seems that this is unreal. But what to do if it is the wind symbol that exactly characterizes a person’s worldview and state of mind? Typically, the pictures show the wind in thin smooth lines. But such picture is almost impossible to display on the human body. Let’s try to figure out what symbols you can use to capture the wind.

Wind can be represented in many different ways. Quite often it is written in Chinese or Japanese hieroglyphs. But you can use the Arabic technique of writing, or just write in Latin. You can also dream up and come up with an image of your own wind. Wings, clouds, falling leaves, waves, a running horse, a ship, a bird, or a man with arms spread apart can represent its image.

Wind is also depicted in the Japanese manner or in the Tribal technique. The easiest way to depict this element is curved plastic lines, but they all must come from one point.

Photo examples of drawing a tattoo with the wind (135 photos):

If you decide just to write the word “wind”, then you need to make sure that the word is correctly written in a chosen language. After all, hieroglyphs are very demanding and, if you do not finish a small dash or make an extra touch, it can result in a completely different word. Even the wrong point or line can dramatically change the essence of what is written.

The wind tattoo suggests weightlessness and independence in the first place. It is suitable for people who constantly travel, often change their place of living. The wind speaks of vitality, impermanence, and carelessness.

The wind is this element that is not always harmless. Sometimes there are storms, hurricanes or tornadoes. These phenomena occur very quickly. It is impossible to guess in advance where and what will happen. As a result, homes are being destroyed, ships are drowning and people are dying. Therefore, you shouldn’t try a patience of a person wearing such tattoo. They are difficult to get under their skin, but if you succeed in this, the result can be unpredictable.

The symbol of the wind can mean freedom of spirit, quick thinking. This element is a source of energy. The wind has also a negative meaning: inconstancy, variability, unreliability, evasiveness, noisiness, roughness, and impetuosity.

In Feng Shui, the symbol of the wind is a universal talisman that protects its wearer against dark forces. “Feng Shui” is translated as the doctrine of wind and water, so this element is given much attention. In China, they talk about the wind as a divine messenger. Such symbol is often chosen by sorcerers and magicians.

The wind in Greek is pronounced as “pneuma” and denotes a breath of wind and divine spirit. Previously, people did not know what caused the wind and assumed that this was a manifestation of the gods’ will.