On this page, we consider the meaning of the tattoo “griffin”; the significance, history and possible interpretations of this tattoo pattern. For those who also want to get acquainted with examples of the griffin pattern in order to get a tattoo with a unique image, we offer two more pages within our tattoo portal: 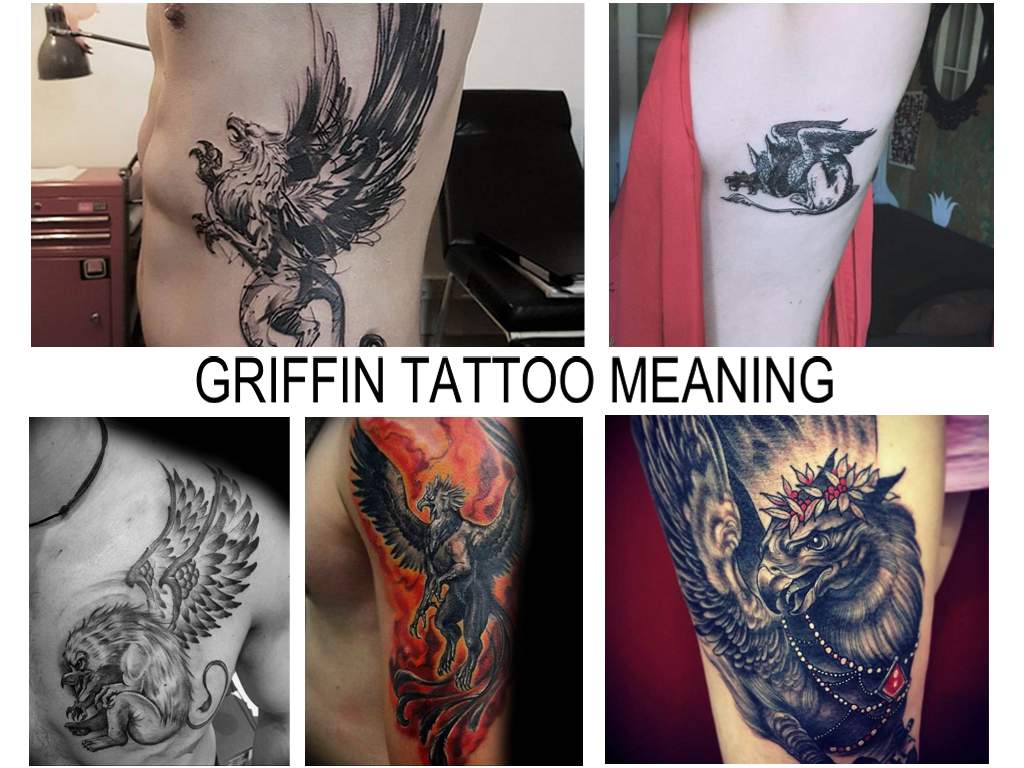 Interesting facts about the significance of the griffin tattoo

A griffin is a mysterious and enigmatic creature from myths and legends, a hybrid of a bird and an animal. This being has the body and hind legs of a lion, while the head, the beak and the wings are those of an eagle. It is a cryptic fairy-tale creature that has intrigued people since ancient times.

The griffin folklore has been around since the days of ancient Egypt and Persia, but it is most often associated with the ancient Greeks.

The griffin combines the might of a lion and the fastness of an eagle. As both of them are considered noble creatures, the griffin image had naturally become a symbol of aristocracy.

This creature, being a link between birds and predators, was also considered the patron of merchants, tradesmen and usurers in ancient times, because according to the legends, the creature had the ability to find gold and skillfully hide it from outsiders.

It was attributed the properties of the guardian of wisdom, which led to the frequent use of the griffin pattern as the symbol of the guilds of alchemists and scientists. The image of griffin was also depicted on crests, arms, and coins, architectural monuments and objects of everyday life.

In heraldry, this creature is a symbol of vigilance, contempt of death, and untold bravery.

What does a tattoo with a griffin pattern mean?

For the Greeks, the griffin symbol had extremely positive meaning. It was considered the messenger of the Gods and people believed that it was this creature that protected them and was the guardian of the “tree of life”.

Photo examples of drawing a tattoo with a griffin (199 photos):

As a cross between two living creatures, the griffin emblematizes the duality of a soul, a never-ending battle between animality and humanity, the light and the darkness. The griffin tattoo symbolizes such positive qualities as fearlessness, fidelity, protection of the weak and honorableness. On the other hand, it bears such dark meanings like unforgivingness and vindictiveness.

Both the lion and the eagle rule their own territory. With such a strong symbolical significance behind it, the griffin represents a very strong tattoo that is endowed with willpower, dignity and might.

The present-day owner of a tattoo with a griffin pattern, as a rule, puts the following meanings into the drawing:

This tattoo is usually chosen by men, but it would look harmoniously on strong and independent women as well. Such tattoo can be done in both color and black and white. Whichever you choose, the most important thing is to find a good tattoo artist who can bring the image of the mighty griffin to life and make it look realistic on your body.

The meaning of the tattoo Saint George Demon – Tattoo Meaning