In the material we analyze the meaning of the tattoo “crane”, talk about the symbolism and significance of the picture, and look at some interesting facts. You will be able to get acquainted with examples of the finished crane tattoos and if this information won’t be enough, you can see also: 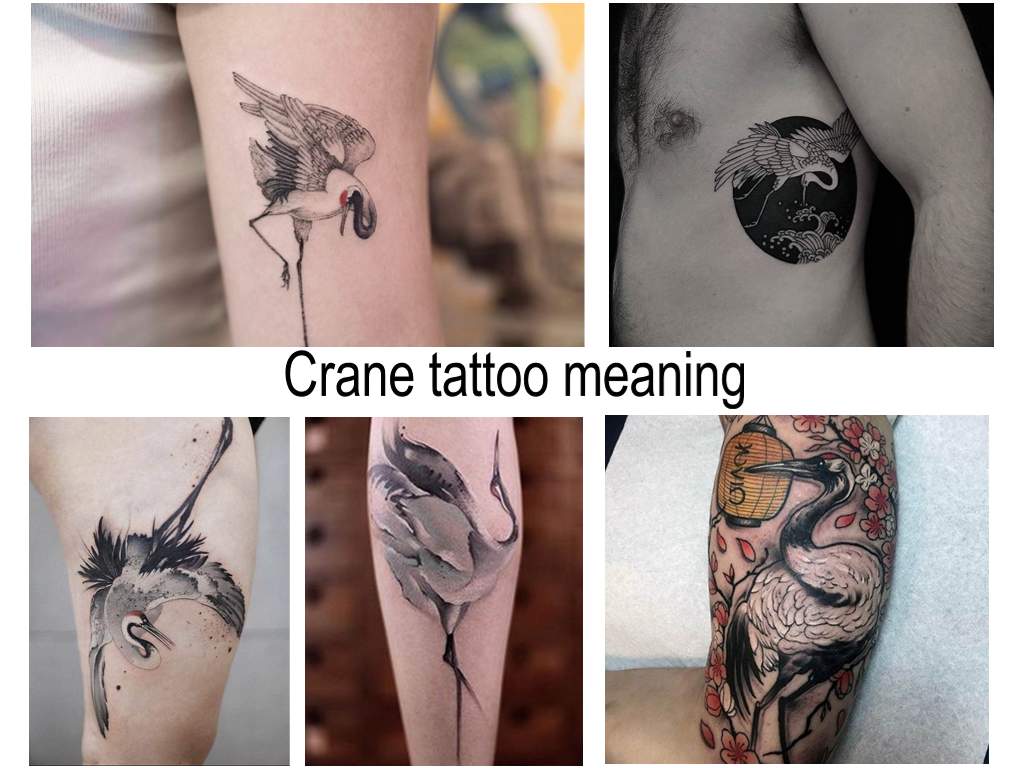 Crane is a very common figure not only in the world of tattoos, but also in the world of mythology and culture of different nations. Therefore, this bird doesn’t have only one meaning. Like a multi-faceted gem, it has hundreds of various meanings, and we consider the most popular ones.

Crane tattoo meaning – the examples of works in the photo

In Asia, the image of a crane is given a special place – it is considered a messenger of good news and a sage that meditates on one leg. In the Land of the Rising Sun, the crane is a symbol of wisdom, longevity and justice. Walking in the clouds like a distant dream, it inspired brave samurai for feats and wise syllables in their evening hokku. The Chinese perceive this bird similarly to their eastern neighbors; only they attach greater importance to the image of immortality. In India, it is believed that the crane bears the roots of betrayal, so this symbol is not positive.

What does a crane tattoo mean?

In Europe, the arrival of cranes is seen as a very good omen that promises a good harvest. At different times, in different European nations, be it Hellenistic Greeks or Celts, different positive qualities were attributed to cranes. For example, purity, domesticity, independence, immortality, spiritual cleansing and chastity, or even courage and bellicosity.

In Africa, the crane was considered the conductor of the gods. In particular, the Egyptians presented it with two heads, bringing peace and prosperity.

The crane is considered the protector and advocate of evil in many cultures and religions, as it cleans the earth from frogs and snakes, which are the main symbols of the nastiness. It also personifies reverence for parents and ancestors.

Photo examples of drawing tattoos with a crane:

The images of a crane with a stone in its leg or in its beak bear a separate meaning in the world of tattoos – they indicate vigilance and concentration. An origami paper crane is a symbol of hope and lightness.

A woman who has chosen a crane for her tattoo may want to emphasize her own femininity, innocence, purity, and devotion for the home. On the other hand, the man shows his fearlessness, courage and broadmindedness, which is akin to the wide crane wingspread.

Crane is a versatile and handy figure for a tattoo. It can be portrayed anywhere in any position, be it a long-distance flight that embodies an elusive dream, or a crane standing on one foot among rivers and swamps. There is a great variety of tattoo designs with this wise bird and only your imagination and your tattoo master can help you come up with something new. The cranes can be portrayed in various styles: from minimalism and Polynesian to Japanese style, trash polka and realism.

There are so many styles and even more meanings; the popularity of the crane is in full swing, but this doesn’t make the crane image on the human body less individual. This is the bird that will always soar high in the sky, or stand quietly in a swamp, waiting for the unwary frog, without paying attention to the meaning that people attach to it. So it’s up to you which value this undoubtedly noble and proud bird will bear.

The Meaning of the Volos Tattoo The umbrella tattoo meaning