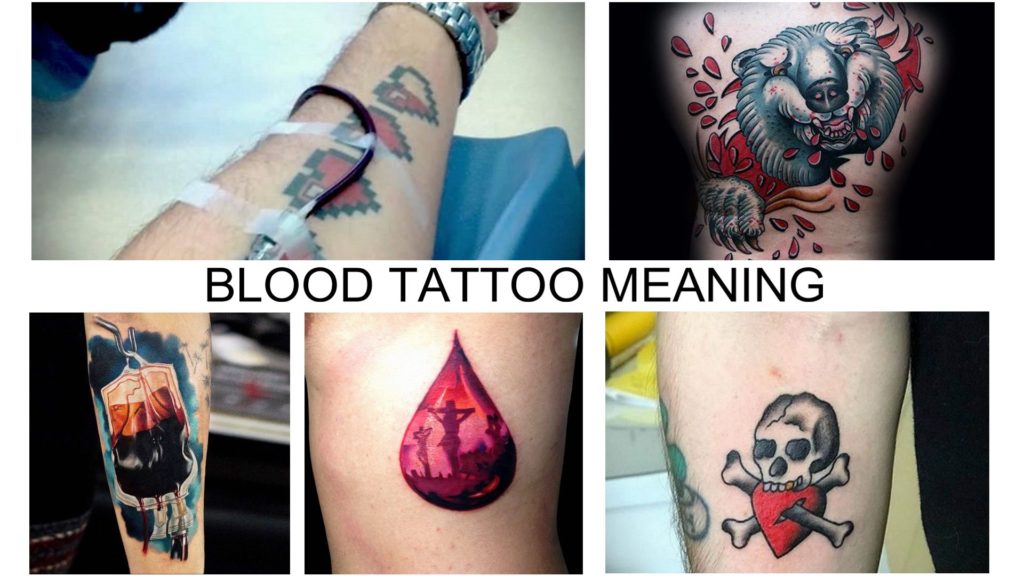 Tattoos depicting blood always look unusual and even somewhat shocking. For such designs, red tones are usually chosen, rarely bluish tones. A design can also be made in the form of letters. For example, the inscription “blood for blood”, which means that the owner seeks revenge and is determined not to leave the guilty ones unpunished, is very popular among fans of tattoos of this genre.

The blood tattoo designs are mainly chosen by men. This image symbolizes a warrior spirit, masculinity, energy or the desire to take revenge. Additionally, this tattoo may indicate a vampire theme fan or a soldier.

A bleeding bull represents rebirth and a surge of energy. This interpretation dates back to the times of the ancient Romans, who identified bull blood with vitality and health.

Blood flowing down a rose symbolizes unrequited love. This is a reference to the sad Ottoman legend: the nightingale fell in love with a beautiful rose and sang songs to her every day. However, the rose pricked him and the unfortunate lover died with his love unreciprocated.

Dark-colored blood drops seeping through the seams may indicate a fan of the Gothic culture. In some cases, such tattoos can be a sign of mental disorders of their owner. However, such tattoos can merely indicate people who want to show their uniqueness, to stand out of the crowd.

blood tattoo on the arm

Such tattoos are meant not only for aesthetic, but also practical purposes. Nobody knows their exact origin but during the war in Afghanistan, they were already widely spread among soldiers. The image does not demonstrate the position of a person in society or his hobbies, but represents the important information. This option is a win-win because the blood type does not change throughout life. No matter what happens with its owner, be it trauma, amnesia or memory disorders, such tattoo can be very helpful and even save a life.

In Japan, tattoos with the image of a blood type symbolize the character of a person. The 0 type is characteristic for determined and purposeful people. The A type is for secretive, but at the same time reliable individuals. People with the B type are recognized as smart, and with the AB type – as calm individuals.

Blood images are very popular among fans of vampire sagas. With the help of these tattoos people bring themselves closer to the unknown, and therefore so alluring world of evil spirits.

They are often chosen by women as a sign of emotional experiences caused by betrayal of friends, betrayal of the significant other or the loss of a loved one. The most commonly chosen images include eyes with red tears or bleeding hearts.

It’s no secret that scarlet tones cause excitement and a whole storm of emotions. Such an effect of the red color has already been proven by scientists. According to the physicists, the red color has a long light wave. The body needs to spend a large amount of energy in order to perceive it. That is why red dresses are so popular among young and energetic girls.

Very frequently people ask to draw scars or wounds on their bodies. Of course, blood is always present in these designs. The inflammation design is very popular too. The tattoo is done in a way that it looks like the person was struck by an unknown disease.

In any case, a large role in the interpretation of tattoos is provided by additional elements in the design. Therefore, the meanings of tattoos of this kind are very diverse.

The text of the article was prepared by: VAKULA82 (Golovatskikh Elena Alexandrovna)

The meaning of a bracelet tattoo