On this page of our catalog with the meanings of various tattoos, we will tell all the most significant things about the meaning of the tattoo “gladiator”, the value and history of this pattern. For those who have already chosen this drawing for themselves and are considering going to the tattoo salon for the application, we suggest that you familiarize yourself with two thematic materials: 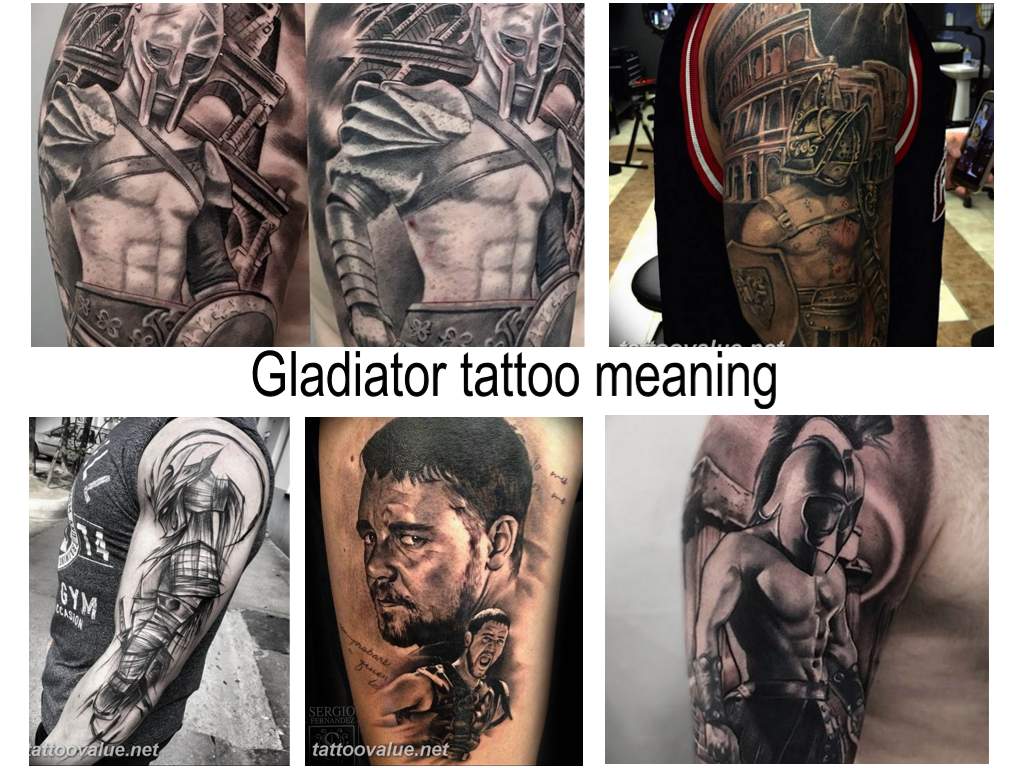 Gladiator tattoo meaning – The most interesting

The word “gladiator” derived from the Latin “gladius”, which means “the sword”. Gladiators were slaves, warriors captured during battles, and criminals. All of these people were previously trained to wield a sword, and then pushed against each other to fight to death.

These battles and sacrifices in ancient Rome were held in arenas for seven hundred years. Initially, the Romans organized these so-called performances on the days of major holidays, so these deaths were a religious sacrifice to Mars, who was considered to be their bloodthirsty god of war. And the gladiatorial fights turned so enjoyable for the Roman citizens that they began to be held for literally any reason as entertainment.

The Romans adopted such type of sacrifice from the Egyptians, Greeks and Etruscans. This is explained by the fact that in the territory of the vast Roman Empire there lived a great multitude of peoples, either conquered by force or attached voluntarily to the Empire. And there was not only trade, but also cultural and human exchange between the former countries on these lands.

At first, only prisoners of war and those sentenced to death were ranked as gladiators. According to the laws of the Roman Empire, if a fighter defeated all opponents and won a sufficient amount of money, he could buy out his life. There were cases when some free people were willing to get this bloody money and they became gladiators voluntarily!

Gladiators were divided into types, and each type had established weapons, ammunition, tools, whether the gladiator would fight on horseback or on foot, against animals or against people, or maybe just show routine with animals.

The fighter first declared he is “legally dead” and took the oath. After that, he entered another world – the word of other laws and other concepts. Here they expressed themselves with gestures, and observed the rules of honor (if it is considered an honor to acknowledge the defeat and surrender to be killed by the opponent).

Photo examples of tattoo designs with a gladiator (320 photos):

According to Emperor Caracalla (3rd century AD), the ideological basis of the gladiatorial battle is to sacrifice alive to feed the dead. Also, any individual could organize such performance in order to commemorate his late relative, especially if there was such a testament of the deceased.

In addition, organizing gladiator fights to please the public was a sure way to win the election. For example, Caesar secured his votes in the elections when he organized a fight with 320 pairs of participants.

Women were also allowed to take part in battles (by the decree of Emperor Nero), and Emperor Domitian allowed dwarfs to participate as well.

The official ban on gladiatorial fights was established in 404 AD by Christian emperor Honorius. With the official spread of the Christian religion, Christians resented the display of violence, murder and suicide that took place in the arena. The official decision was triggered by the death of the monk Telemachus from Asia Minor, who was killed by the public when he ran out into the arena and called for an end to the bloodshed.

Shortly after the introduction of the decree, the gladiator fights became entertainments in which people in 90 percent remained alive and only 10 percent died. Then there were also gladiator schools that taught the art of battle and trained gladiators for money. In addition, in the event of war, such fighters were recruited into the army and given all the necessary ammunition and salary. With the collapse of the Roman Empire, gladiator fights have become obsolete.

What is the significance of the gladiator tattoo today?

In our time, the tattoo “Gladiator” bears a message, a reminder of that time – the time of battles, barbarians, blood and death that meant nothing. Courage, fearlessness, despair, hopelessness intertwined in this pattern and became the meaning of such tattoo.

The movies “Gladiator” and “Troy” brought to us the spirit of that time. Their main characters, Maximus and Achilles became popular images as a tattoo on the bodies of many people.

Such tattoo would look best on the shoulder, shoulder blade, back or chest. Other parts of the body are not very suitable for demonstrating a fighting gladiator. No matter, in color or black and white – such tattoo looks impressive.

The fans of such tattoos are mostly young men, but, with rare exceptions, women choose them too.

The drawing is done in a realistic style, so you need to find a good artist to make a gladiator tattoo. Everything matters here: the posture, facial expressions, gestures, weapons – all the details, because they all have their own message of meaning. In addition, do not forget about the significance of this tattoo in the criminal world. After all, this is a kind of prison tat! It is interpreted as a “mature wolf”, and the blood dripping from a gladiator’s sword speaks of a “warrior” with impressive experience.