The Meaning of the Iguana Tattoo

Home / The Meaning of the Iguana Tattoo 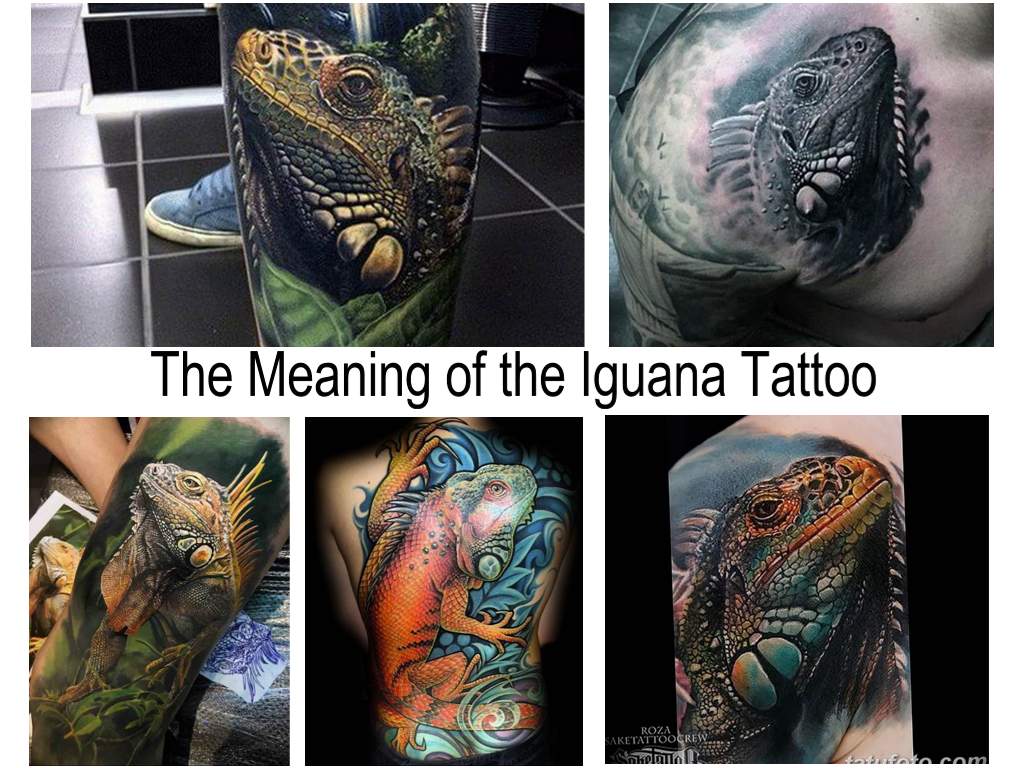 The Meaning of the Iguana Tattoo – The most interesting

Iguana is a cold-blooded large lizard living in tropical forests. Iguanas live mainly in the crowns of trees, eat plant food, have good plasticity and coordination. Along the spine of the iguanas there is a high crest, and under the lower jaw there is a hanging throat bag. In general, the body of the iguana is characterized by an abundance of horny growths of various shapes, which together with colored scales make them look like small dragons. They live in Central and South America. The original natural range covers a large area from Mexico to the South to the Southern Brazil and Paraguay as well as the Caribbean Islands. In addition, several populations, whose ancestors were pets, formed in some areas of the United States, for example, in Southern Florida, including the Islands of the Florida Keyes, in Hawaii and in the Rio Grande Valley in Texas.

Tattoo in the form of an iguana can be applied with a certain sense, or simply just because of the aesthetic properties of the image. Due to the shimmering scales pattern, which can be made in any color, will not look unnatural. An unambiguous interpretation of this symbol does not exist, but it is possible to identify the main qualities for which tattoo lovers tend to have an image of an iguana on their body.

In most cultures, the image of this lizard stands for wisdom, cunning, calm in tense situations, the ability to avoid conflicts and dodge defeats, as well as agility, fortitude and courage. Often it is attributed to such properties as bravery and belligerence.

The image is usually done in green, but you can also add red, orange, and black in order to make the image more brutal. Such a tattoo is stuffed by those who seek to attract good luck, often communicate and interact with people, hope to get additional strength while working in the field of politics or business.

Also, the iguana is considered by many peoples as a symbol of immortality, so its image in different variations can impress fans of extreme sports or people with a difficult fate, which often have a great risk in their lives.

Girls choose this picture also in order to emphasize their own sexuality. In this case, the iguana can be stuffed on the legs or lower back and combine warm colors and tones. You can also portray the “fire” iguana in red or orange.

Iguana can be considered a simple reminder of the time spent in the country where these animals are found.

Almost every part of the body fits for the tattoo of the iguana. The image of a crawling lizard on the hands or feet will look impressively, or even wrapped around the neck or wrist. For “portrait image” back, chest or stomach will fit perfectly.

Historically, the iguana caused absolutely different associations among representatives of different peoples. The Indians considered it as a symbol of fertility, the Egyptians as wisdom and good luck. In Greece, the lizard was revered as a symbol of trade and rhetoric. Approximately similar opinions were held by Africans who saw in the iguanas the personification of diplomacy and the ability to find compromises, avoiding military confrontation. In Slavic mythology, a large lizard usually warned of the danger and had the patronage of the main character.

Among the Romans, the iguana was considered a symbol of death, although nowadays it is more pleasant to believe that it just helps to evade the tragic outcome of events.

The text of the article is prepared: ALINAHALAYA (Chalaya Alina Aleksandrovna)

The Meaning of the Volos Tattoo The umbrella tattoo meaning