The dagger tattoo can have any meaning because of weapon personify danger, mortality and power. There are a great number of types of weapon. Every type poses a great threat. 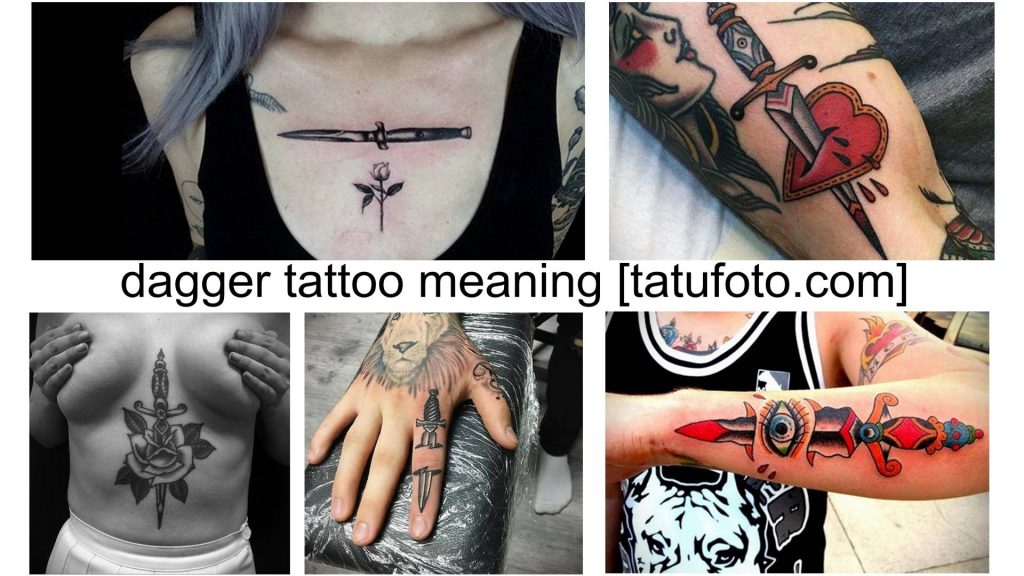 Different types of bladed weapon attracted special attention in all times. Heavy Medieval swords that have long handles, short and lethal gladiuses of the Roman legionaries, rapid and exact daggers that interrupt lives in a split second.

The sparkle of cold and tempered steel attracts men’s attention equally glaring shine of diamonds attract women’s attention. Bladed weapon was preferred since the time of appearing of firearms. The reason for that was that people thought using weapon that kills at a distance is dishonest. But the art of war changed with each epoch. Different swords and daggers that were lethal kinds of weapon earlier became exhibits of different collections and museums.

Photo examples of a tattoo pattern with a dagger (533 photos):

Daggers is a separate theme for conversation. They were very popular for a long time because of their compact size and easiness allowed hidden wearing in the clothes and unnoticeable striking. That was their distinction from heavy and large swords. The reputation of deceitful weapon of thieves and betrayers fixed to daggers because of that reason. Rapidity and easiness of this weapon have many noble qualities also.

Meaning of the dagger tattoo

Depictions of knives and diggers symbolize a great number of qualities. Agility, resistance, revenge, exactness of actions, treacherous, freedom and protection, suffering, duality are among them. The dagger tattoos depicts with another elements often. The tattoo that depicts a dagger in heart symbolizes betrayal in love and can mean revenge and brutality for instance. The dagger or knife that is bloodied with droops of blood that flow down is a feature of decisive actions despite any consequences.

The dagger that is drawn with a scull personifies death mostly. Readiness for anything depicts as a scull with a knife in it’s teeth. The dagger with a serpent that twines around it is a symbol of a thief or a leader of thieve gang. Soldiers make a tattoo of a knife and a person’s head during military action.

The text of the article was prepared by: KALEB1990 (Konstantin Y. Moshnikov)